Short History Of The Shannondale Springs 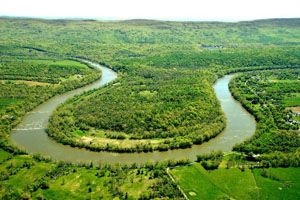 A Short History of the Shannondale Springs The Horseshoe Bend of the Shenandoah river
​
Long before the white man entered into the scene of Shannondale, the Native Americans had discovered the springs of the area and often used them for medicinal purposes. The main springs were thought to have a mild laxative effect without the sulfrous odor of other commonly known springs.
In 1649 King Charles II of England had deeded five million acres lying between the rivers to a group of loyal supporters, including the Fairfax family. Through death and marriage the land was consolidated under one man, Thomas, Lord Fairfax, who established his seat at Belvoir, approximately four miles upstream from Mount Vernon. Later, he moved west of the Blue Ridge Mountains to Greenway Court in Frederick (now Clarke) County, Virginia. A portion of this vast land acreage included the tract known as the Shannondale tract.

Fernandino Fairfax (1769-1820) inherited the 29,000-acre Shannondale tract. He was forced to sell several parcels of this tract between 1811 and 1819 to settle debts. Early maps of the area show Fairfax's residence, Shannon Hill, across the Shenandoah River from the horseshoe bend of the Shannondale site.Fairfax sold an undivided two-thirds of his land of Shannondale to Thomas Griggs, Jr. and Benjamin Beeler in November of 1819. The deed described the land as being opposite the Shannon Hill tract containing about 60 acres of land in an area that was commonly being referred to the horseshoe tract. In July of 1820, he sold his remaining holdings of Shannondale shortly before his death. By that time, a few houses and a resort had been built and was already acquiring a following, but after Dr. DeButts describing the great curative powers in 1821, its popularity became well known and led to quite a prosperous start.
In the 1830s, the resort fell on hard times. Not only was the Springs hard to get to before the railroad's arrival, cholera was a serious plague and people were cautious about visiting areas where people might congregate. Disagreements between the owners also took their effect in their allowing the buildings to fall in disarray unfit for visitors.

By 1835, the railroads had fully became functioning within the area, attracting the more elite from Baltimore, Washington, and Richmond areas. In 1838, the resort reopened under new management to accompany this new customer base. The 1840s and 1850s found the Springs quite the center of a variety of people and activities. Not only did those who sought the health benefits of the waters frequent the resort, but also those who were artistic in nature seeking inspiration and government officials forming allies in a spot that not only provided great entertainment of balls, jousting tournaments, fireworks, and galla events but quiet and reflective activities of fishing, boating, and a nice game of checkers or backgammon.

One very popular female writer of her time spent July and August of 1850 at the Springs. Mrs. Emma D. E. N. Southworth wrote a novel called Shannondale during this visit. ​
The romantic tale lead to the myth about Lover's Leap, a cliff overhanging the Shenandoah River across from Shannondale Springs. For those interested in reading this novel, it can be read online here.

Throughout the 1840s and 1850s, the resort received a popular following under the leadership of the Shannondale Springs Corporation, but the tumult politics of the late 1850s brought a serious decline in that popularity. In 1856 the property came up for sale and was destroyed in March of 1858. A chimney fire rapidly spread out of control not only destroying the resort but a few adjacent buildings.

The Springs would lay fairly dormant during the Civil War except for the frequent visits by the Confederate raider John Singleton Mosby and his men and the Federal cavalry responsible for the destruction of Mosby's operations.

In 1867, the Shannondale Circuit of the Methodist Episcopal South was noted holding its First Quarterly Meeting at the Springs. During the summer months, the land became frequented by religious services, church meetings, and church picnics. Many attendees stayed the night in what was left of the resort structures and tents. The area became popular for picnics and fishing parties.

Although the property came up for sale again in 1868, it still had not been sold by the great flood of October 1870. This flood that destroyed Harpers Ferry and Shenandoah River industries also destroyed the old Shannondale Ferry House.

Some renovations of the cabins were attempted in the 1870s, but by the 1880s, the area had dwindled down to only 8 cabins remaining. In 1888, the Springs were finally sold to Eugene Baker and J. Garland Hurst in a public sale. In 1890, a new building was rebuilt on the same spot the old one had been on the same pattern as the old one. ​
The Second Hotel ca 1890This business venture was in conjunction with Charleston Mining, Manufacturing, and Improvement Company whose aim was to develop major industries, improve transportation, and create large residential and commercial subdivisions. This project was not realized and with it went the plans for Shannondale Springs Resort.
After Baker and Hurst defaulted on the loan, H. C. Getzendanner purchased the property in October 1902 at public auction. His purchase included the original Shannondale Springs resort area, the ferry and its franchise, and an adjacent 125 acre farm. He reopened the hotel in 1903, new and improved, but fire again destroyed the property in November 1909 along with one of its cottages. Two weeks later, the farmhouse also burned down. The ferry continued to do business, but again the Springs became a site that was mainly one for picnics and religious retreats.

In October 1919, the Getzendanners sold the property to E. B. Fry for the great sum of $500. Fry used the land to graze cattle, grow sugar beets, and utilized the resort for friends who came to visit. In 1931, he leased the land's water resources to a company that bottled the water and sold it for $1 per five gallon glass jar.

The property was again sold in 1937 to Thornton T. Perry, Sr. His heirs later donated 580 acres to the Nature Conservancy. Ownership of the land was transferred to the West Virginia in 1986. The whole property is now under the stewardship of the West Virginia Division of Natural Resources as is used totally as a hunting and fishing preserve.

In 1986, the Jefferson County Historic Landmarks Commission obtained a least from the state of West Virginia on the portion of property that the Shannondale Springs Resort resided on. The deteriorating bath house was restored in the Summer of 1997. A grant from the State Historic Preservation Office allowing the historic boundaries to be resurveyed and the locations of the foundations of some of the original buildings and structures to be identified.