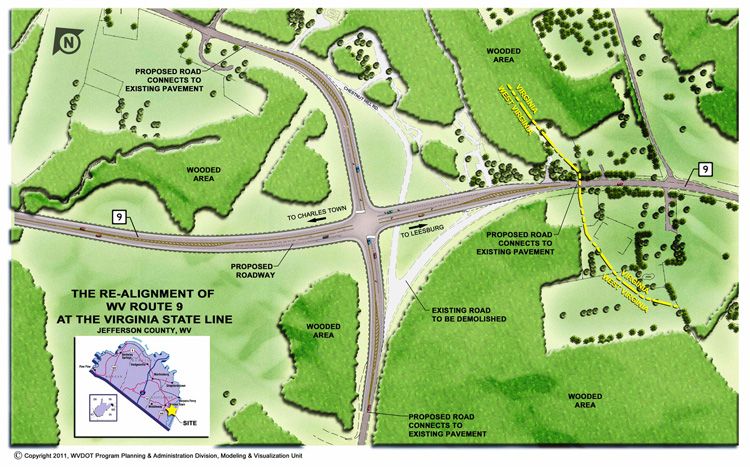 While questions still remain as to the specifics of the proposed interchange at the intersection of the New Rt 9 and old 9 & Chestnut Hill Rd., the pic below shows the general layout. I suppose we can assume from the road markings in the rather colorful drawings, that there will be stop signs at Old 9 and Chestnut. If so, expect a LONG wait to make the turns. Below find a press release from: Matthew T. Mullenax, GISP Transportation Planner/GIS Analyst Hagerstown/Eastern Panhandle Metropolitan Planning Organization

The attached rendering is intended to demonstrate how the new WV Route 9 will merge with existing WV Route 9 in the vicinity of Chestnut Hill Road in Jefferson County. The drawing was prepared by the WV Department of Transportation Modeling and Visualization staff in the Program, Planning and Administration Division in response to a request by the Hagerstown Eastern Panhandle Metropolitan Planning Organization (HEPMO). Jefferson County Commissioner Lyn Widmyer, Chairperson of HEPMPO, requested the drawing to inform interested citizens how the new intersection will function once the work on the road is completed sometime in 2012. As stated by Commissioner Widmyer, "It is hard to visualize what the new traffic pattern will be; this drawing shows what drivers can expect when the road is completed". The rendering is available to view or download on the HEPMPO website at www.hepmpo.net. A detour to Rt 340 south to Berryville may look more promising when this plan becomes reality.

@LFE and I rode out the roadbed from the overpass on the Rt 9 bypass, across Cattail Rd and out to the river where the new bridge will take flight to the east bank of the Shenandoah on the Mountain. It had been mentioned earlier at a Blue Ridge Watershed Coalition meeting that a trip down the mountain will be sure to give a motorist vertigo. The view of that last turn before approaching the east end of the span from the mountaintop certainly confirms that belief. The shot below was taken at the approximate height of the bridge deck on the west side of the river. The view from under what will eventually be the bridge span gives some more detail including the roadway on the weir/dam under which the Shenandoah is temporarily flowing. It allows traffic from one side of the construction to the other. Note that little yellow cage nearly level with the girders atop the bridge supports. The slack-jawed doofus in the foreground is easily 40' below the height of the eventual deck of the bridge, standing on the access road that leads to the dam and some fine fishing. This bridge has Bungee Day written into its future. In the close view you can see the little yellow cage a bit clearer. LFE wanted to drive down and ask the construction guys if we could take a ride. Fortunately, he listened to reason. But MY OH MY, what a ride that would be!

Fred Blackmer sent us this YouTube clip taken via jdslowlo's collection. It was taken from above 4/30/2011.

And one Fred took 11/2011 that gives perspective from the east side of the river,

Here are some shots from yesterday (6/24/2012) while fishing along the Shenandoah above the dam (Courtesy of @Ricky):

Little's Falls are on the left and you can see the dam and the road accessing it in the distance on the left where the bridge will land on the western bank.

Feel free to comment with your own photos of the bridge construction.