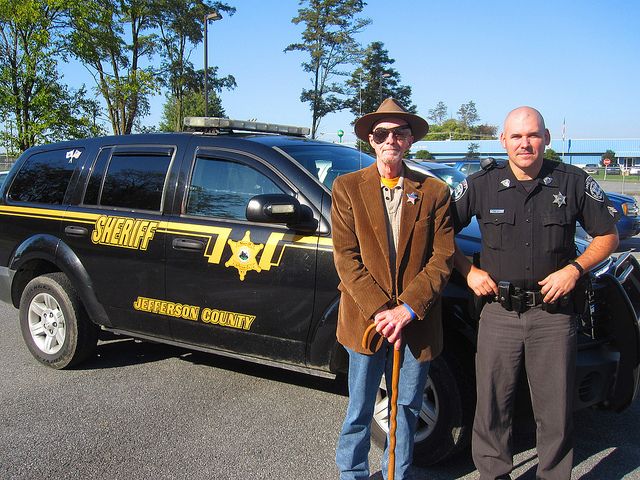 I arrived at the sheriff's office in Bardane a little before 3PM or 10 hour shift (3pm-1am) and was assigned to ride with Sergeant Sell, probably so they could keep me out of trouble.

We left the lot a little before 4PM after the Sgt. had checked logs and given me a short course on what to expect as a "ride-along" and I had staged the photo op above.

The Sergeant introduced me to the “cockpit" of the cruiser, packed with electronic equipment and pointed out how to “light up” the cruiser and activate the various siren modes in case I was alone in the vehicle and something “bad” occurred. He also showed me why he rated an SUV as a cruiser. As the person in charge of the shift, he was carrying extra equipment if it was needed. I also think he liked the SUV, too. We hadn't cleared the gate at the Sheriff's cruiser lot when we received a call of a hit and run just down the road on the Leetown Pike toward CT, about 3/4 of a mile from the office.

Fortunately there was no injury and minimal damage. The driver was upset and the Sgt. took time to make sure all was well. In addition to interviewing the driver and he took time to talk to a colleague of the driver who happened on the scene. There had been another witness, but that person had left by the time we arrived. After entering the report in the computer, we proceeded to the missing witness' residence. He wasn't at home so the Sgt. left a message on the door, completed more paperwork and then did a run out from Ranson to the bypass looking for speeders and such. The cruiser has a nifty radar set up that can detect speed while moving or stationary and from both front and back. None of that big equipment hanging on the window anymore.

The county is split into 3 general areas radiating from the CT/Ranson area:
The Sergeant roams the entire county.

After the quick break, it was back on the road. @Sgt. Sell had a Family Protective Order (FPO) to serve on the Mountain. Down Mission Rd at the infamous bottom of Johnson's hill a pickup came over the center line (where most tend to do) going at a high rate of speed. The Sgt made the determination that at 7PM there was no safe place to do a 180 degree turnaround until we would have reached Conifer Court. He opted not to pursue. A lucky break for one knucklehead.

We stopped at the FPO address. A poignant/emotionally charged encounter as the recipient apparently didn't know it had been filed. The Sgt. spent a considerable amount of time explaining procedures and fielding questions about the limited options that LE had once a Judge issues an order. Subsequently, we went to the complainant’s location to advise that the order has been served. This whole ordeal is complicated, as it so often is, by children involved in the mix. I can see how these tasks can take their toll on the officers.

I mentioned the paperwork the Sergeant has to complete after each call making data entries about times/contacts/actions taken. Sadly tho time consuming, it's necessary in today's litigious and sometimes overly critical world. Lol, while stopped filling out the report about the FPO at a favorite spot along Mission Rd (facing north), a vehicle blew past the cruiser at near 60mph (headed south)-I hope most of you know the posted speed limit on Mission Rd. is 40mph. The Sgt. Swung around 180 degrees onto Mission, pursued the speeder to the 4-way stop sign and pulled him over by the old "guard shack" structure at Gate 4. Aside from speeding, the driver didn't have his license (a VA one) and didn't own the car. It took some time to get dispatch to verify the tags, registration and the validity of the license. We're sitting in the cruiser which is lit up like a blue and red Christmas tree, writing the speeding ticket, when a numb skull rolls thru the stop sign and burns some rubber accelerating toward Riverside. But that durn paperwork has to be done. Next, we decide to do a drive thru the 'dale where our ATVs are apt to be busy BUT get a scanner alert that a family has been threatened with a beating/shooting/mayhem by another family member. The call has originated in Riverside. Another 180 and a hasty trip down Mission to the complainant's home. Driving up, three folks exit the house- one holding a rifle-but he quickly set it down and raised his hands. Whew.

The person threatening hadn't yet arrived. In the meantime Deputy Fletcher has heard the call from near Kabletown and advises he is responding to provide backup. He arrived in what I would consider very good time.

The Sgt has been interviewing the complainants and determined the one threatening had been calling from a local bar and was w/o a car, thankfully, given that rifle just mentioned. BUT a call to the eatery yielded information that he had just left after obtaining a ride from another patron. The bar owner/server isn't sure where they've gone but describes the make and a rough description of the older model vehicle.

With nothing more to do in Riverside both Deputy Fletcher and the Sarge leave. We are in the rear. We'll chalk this up to experience (or the Sgt's “spidey sense”), but all of a sudden Sgt. Sell is doing a turnaround in a driveway and heading back toward Riverside. He'd seen a car matching the description just pass us. He makes a stop near Lake Forest Estates. Deputy Fletcher returns for back up. It's tense since there had been a threat involved. The bottom line here was that the family member wasn't armed and it was determined that it was just the booze talking and making threats. The loser in the deal was the driver who had given the ride. He was arrested for DUI and we ended up transporting him back to the Sheriff's offices for processing.

Fortunately he was a more or less friendly drunk. The booking took nearly an hour and a half. Trust me when I say you don't want to get arrested for DUI. After the prolonged processing, we took the gentleman to the Eastern Panhandle's Regional Jail (ERJ) for a stay overnight. The Sheriff's Booking facilities are not 5 diamond accommodations. I wasn't allowed inside the ERJ but I expect that it isn't too much more elegantly appointed.

I ought to mention that during the booking, The Sergeant took the time to call the two parties involved in the earlier FPO order and made a third call to arrange for the person served to visit with the children with the help of another family member. It's little touches like that which don't get mentioned in the papers: serving and protecting.

On the way back from Martinsburg, we swung by Shepherdstown and set up a speed trap in another of the Sgt.'s fav places. We did pull over one vehicle, but in a demonstration that LE can show some mercy if you are respectful and sober, the Sarge let the gentleman go with a warning to ratchet down the speed.

I was given a tour of the areas outside Shepherdstown city limits where there are often loud parties (ah, how I recall those college days). None were observed. We did stop by to chat with some Shepherd U. police who were on a call, a goodwill howdy to fellow officers.

Lastly, on the way back from Shepherd on the new Rt 9, we pulled onto the median since we had heard a call that a suspected drunk driver had hit the bridge crossing the Opequon Creek and was headed toward CT at a high rate of speed. But, a subsequent transmission clarified that the bridge was the one on Rt 51. Who knows how long the shift would have lasted if we had to be involved in a high speed chase and another DUI arrest?

This account is not complete. There were many calls to dispatch, follow-ups, requests for "welfare" checks and many interesting discussions with the Sergeant about law enforcement.

I've mentioned elsewhere how great I think this program is. You don't have to stay for an entire shift. You get a new perspective of just what an officer's duties entail, the blizzard of paperwork, the stress involved. AND anything can happen. The shift didn't include any accidents, chases, code blues, domestic arguments or other such occurrences, but anything is possible. Please take the Sheriff up on his offer and experience a ride-along for yourselves.

How do you get special treatment? I inquired about the ride-along program a few years ago to Sheriff Dougherty but he informed me that the program had been ended on account of civil lawsuits.