What We've Learned From The Recent Snowstorm 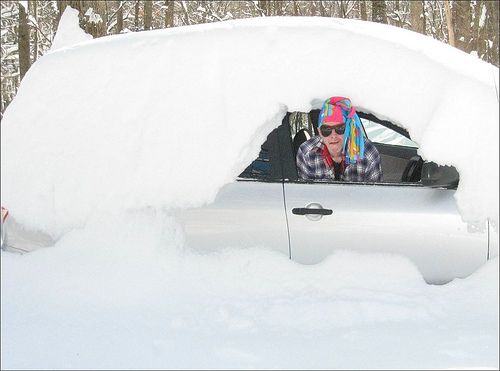 This article was originally published in forum thread: What We've Learned from the Recent Snowstorm, started 12/21/2009...

​
@millers1 had it right in another thread. Some veterans of mountain life got lazy, lulled into complacency by 6 years of easy going Winters.

Some new arrivals (those arriving after the last big snow-36"- in February of 2003) were clueless as to what precautions/steps should be taken when a storm approaches.

We were lucky this time. 22-24" is mild by past standards, there was no ice and power stayed on, the snow was light and fluffy and all in all, most of the roads have been cleared much quicker than in past heavy snows.
One item I note, as a longtime resident, is that there are many, many more residences higher and higher on the mountainside. Some of these can expect longer and longer response times until relief arrives.

That trend coupled with a hefty increase in the number of peeps residing in all our Mountain subdivisions, begs for a checklist when fair warning is given for an oncoming storm.

What I'd like to propose is the submission of suggestions for such a checklist.

Not a survival kit for a disaster-though many items/actions will be the same-but a checklist handy for us veterans, newcomers and those yet to arrive that sets forth "to do's" when bad weather (in any season) looms.

Replies are as follows.

@longleaf - I learned that Subaru's kick ass...the Chevy Blazer behind me as I was driving up Chestnut Hill? Not so much.

@AAT53 - Not this snow, but last week's snow: tire chains rock. We got stuck in that stuff and having the ability to just throw the chains on was great. Makes the commute on an icy road much less stressful.

@Kensey - This evening I learned that somebody thinks it's completely acceptable to pass two cars in a no-passing zone in the snow at night on Mission Road. I have to wonder if it was really worth it since he turned off a quarter-mile up the road, still in sight of us.

@shadowplay - In these conditions (untreated roads) when descending significant elevation, place transmission in lowest possible gear. Use brakes sparingly, for your own sake, and for the people behind you. If people stack up behind you and act menacing, tilt rear view mirror up, ignore and proceed.

@LazerFlash - Morons who think the brakes are their friend in these kinds of road conditions cause the accidents that they crawl away from.

@Kensey - In general if you find yourself having to brake for lights, stop signs, etc., you're either going the wrong speed or you need to anticipate things more accurately.

@derricksonb - I've learned nothing from this year's two minor snow showers that I did not already know. In general many people forget how to drive in the white stuff so plan ahead, leave earlier, drive at moderately slower pace and expect to encounter delays.

SUBARU and the power of symmetrical AWD ROCKS!!!! Seriously it wasn't that bad out there yesterday. I tried my hardest to get Baru sideways and practice my drifting skills, but could not for the life of me break traction.

@LFE - Momentum is your friend when going uphill. Physics changes the game on downward descents.

@WVGeo - Worst thing coming home last night was visibility. Constant spray from other vehicles+dark was pita and then the gunk on wipers froze up as I was coming down 9 after St. James and then just smeared everything. Had to pull over at Kabletown (at least I hoped that was were I was going) and clean the wiper blades. Was actually a relief to get to Rolling because the road has so little traffic that there was snow rather than ice/slush to travel on.

@Willis - Remember, peeps, this thread is a learning experience and required reading for noobs to the area. Pop quizzes will follow. One question-Does everyone have a suitable place to stow their vehicle when the going gets tough? One of the major complaints (and the delight of the towing companies) was parking in driveways or on lawns w/o asking owners' permissions. Parking in public ROW's wasn't a good idea either

@derricksonb - I have also learned that people are morons who use no common sense with regards to parking. Por Ejemplo the idjuts who parked their cars at the pull off at Gate 1. Instead of parking perpendicular to Mission Road, which creates more parking spaces for others, they chose to park 5-7 cars in parallel. Again, use common sense and think about your neighbors.

@Kensey - It may be useful to make a list of the traditional "snow parking" spots here.

The top of our property seems to be one -- I don't mind as long as people are considerate about it (e.g. tucking in close to maximize available space).
Johnnycake south of Shannondale
Gate One pull-out
Dirt area at the exit of Gate 2
Anywhere else? I know there's gotta be more, those are just the ones I pass regularly.

Wherever you park, please, for the sake of the person whose property you may be on, leave a note with contact info visible in your car window. There have been times I was unable to park our own cars up by the road because the entire space was taken up by people who, if only they'd taken a little more trouble to park carefully, could have left half the area clear.

Also, one thing that's occurred to me is that it might be useful if people know their tire size. Good luck getting a tow if you get stuck in foul weather, but if somebody just happens to have tire chains that fit your car you may still be able to get going.

@sidhe - With age comes wisdom... I've learned that when the white stuff is out there, I'm not!! Make sure I've got firewood, wine and cat food. The white stuff will go away eventually, it always does. I've also learned that folks with 4x4s often revert to teenagerhood, they're invincable. Last Fri when we had a dusting, I took pictures of four 4x4s in about a mile on the rt7 bypass upside down, or in the ditch. They were ALL 4x4s....... the two wheel drive vehicles that were out there somehow managed to stay on the road and keep the shiny side up.

@Willis - I could keep a running list of places to park-keeping in mind that any popular area might invite knuckleheads to vandalize or steal from the vehicles. That happened a couple years back at the Gate 2 and Gate 1 areas. Where would we stow the list?

There's Gate 3 taking care not to block mail deliveries, the parking are at Mt Mission Park, Foodway (w/permission), the area just north of the storage units by Furnace Run. All in all, there just aren't many places that won't hamper snow removal. It's definitely a reason folks should have been striking up friendships this Summer with folks who had nice convenient driveways

Heed Kensey's suggestion to leave a note if you haven't asked permission. I wouldn't hesitate to call a tow truck if I found a stranger's car blocking my drive w/o at least an explanation or a contact #.

@cheerios - the gate one crap has got to go!! now, if you are hit there, that is fine, but other than that get a f'n tow truck! glad to see no cars today when I was driving home (sorry, my little vent)

@shadowplay - Here's a new one for this event. A walking boot sucks, even in just snow showers, when on this mountain.

@boredstiff - If you intend to drive, please do so with a vehicle with clearance for the snow. We had to walk (mostly uphill) around midnight one evening due to a car stuck in the snow. Unfortunately that evening it took my husband 5 hours to get 17 miles to my work, and another 2 hours to get home for the next 17 miles. If they had a hotel in Purcellville, I think I would have stayed...We ran out of gas for the 4 wheeler...so that was the biggest pain...