The Construction Of Lake Shannondale

Lake Shannondale's Construction 1964-1966
The photos below are part of a book dedicated to Charles M. Johnson, Shannondale's developer, by Granville (Pete) Cave. Pete devoted an extraordinary amount of time and energy to make a record that is both fascinating and historical. And he did it with a Kodak Instamatic camera and a pair of scissors. In this day of digital pix and photo shop his job would have been SO much easier.

1966, it was the largest, privately owned lake in West Virginia. It was financed by Shannondale Inc., the developer of Shannondale, with proceeds earned from land sales. Enjoy the show.
(Note that much larger versions of the images can be seen by clicking on the pictures below-we don't want you all to strain your eyes)
need to link to larger formats

July 1964 Looking West
I'll try my best to describe the scenes. I'd encourage you to contact me if you've got questions.

The old fire engine's pump (used to fill the pool) way down in the hollow, the bare start of the foundation of the dam, the drain pipe still uncovered with earth, the iron forms still in place for the bottom section of the standpipe and on and on. I missed much of the final stages of construction (off to the Navy for me in October of '64) but remember these initial ones well.

July 1964 Looking East
Most of these pics are pretty staright forward if you use the Mountain and other recognizable landmarks, such as the Bathhouse (now Mountain Lake Club) to the right of the clubhouse. The road on the far right was the original way to drive to the clubhouse (and past that bathhouse) from what is now Gate 3 There was an old log bridge across Furnace Run, hence the road name "Old Bridge Road". 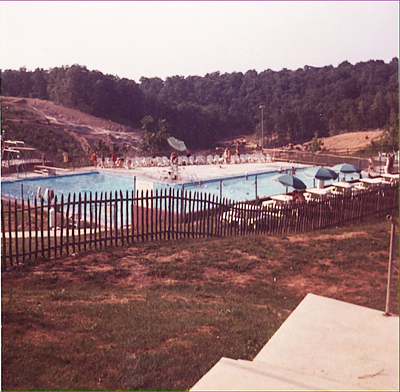 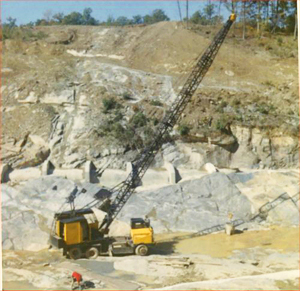 The crane gives some perspective to the size of the drain

4/17/1965 Looking West
Another of Pete's super panoramic views showing bits of fence in front of what, in 2012, is referred to as "Stonehenge on the Lake"

5/22/1965 Looking West(and N&S)
I apologize for the graininess, but the photos, taken with an Instamatic camera were a little out of focus in some areas. I thought a the shot of the cars in the parking lot might bring back memories to oldtimers in the crowd.

7/17/1965 Looking West
Disaster struck the pool (from the dam's construction) and the pool was closed. The swimming activities moved back to the river for much of the Summer.

11/16/1965
Fall colors appear. Ground in front of the Clubhouse is stabilized

11/16/1965
Nearly the same pic as that two two above before without all the brush on the future lake's bottom. The Old Bridge Road REALLY is in evidence. 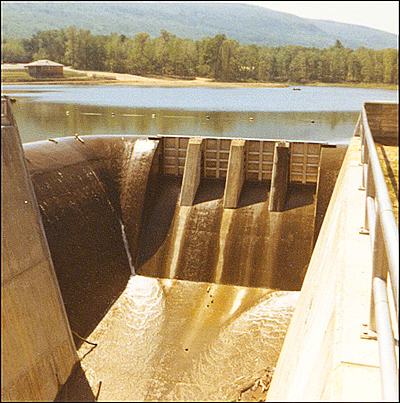 May of 1966
The first trickles of water over the spillway... 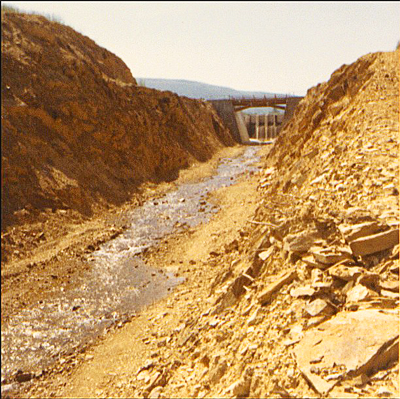 ...and down the spillway from the dam... 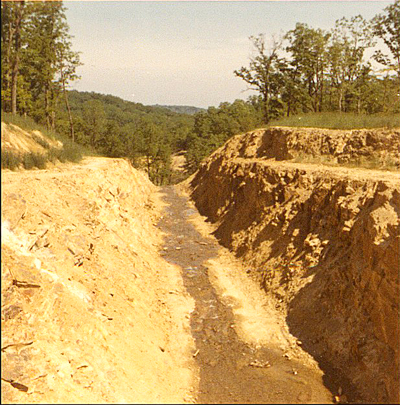 ...toward the Shenandoah River. 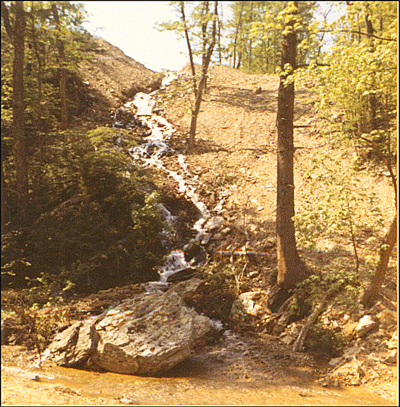 But first it had another stop to make... 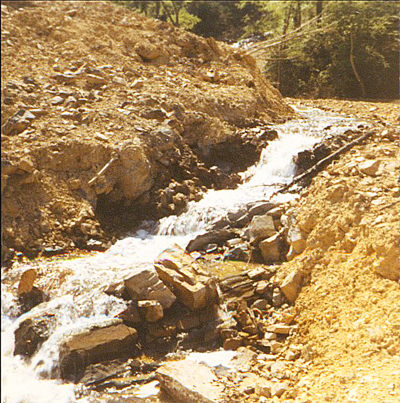 ...after passing the waterfall it created.

5/21/1966
The shale pit below the dam which would eventually become a superb spot to angle for pan fish. And then, following its original course, it was: "Chesapeake Bay, here I come!"

5/21/1966
Finished Product with Watersport Enthusiast
A fitting title for an artist to give this scene, the lake completes the tableau many of us so fondly remember.
Reactions: bsb and Krussken

I just realized there are no comments on this! Thank you to everyone involved in putting this together. You rock!
Wow so rich in Shannondale history... Let's rejuvenate that dam and bring old memories back!