Birth at Weber's Store
Sadly, the Citizens of Shannondale's efforts flagged and finally ended in 1999. Age, demographics and frustration took its toll on the picker-uppers. Some hardy souls continued their individual efforts, but the organized war on litter was stalled. In April of 2004 Shannondale and Beyond came into existence and a year later sponsored the first BRILLO meeting at Weber's Store on Mission Road. 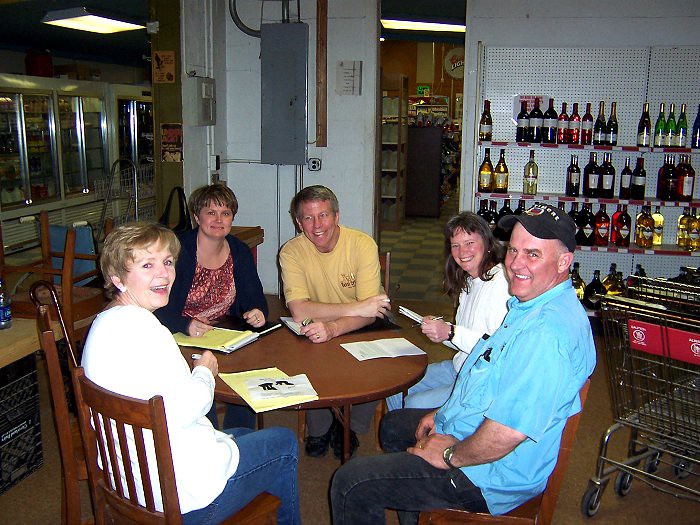 BRILLO'S First Meeting 4/7/2005
The first meeting location should look familiar to most, the interior of Weber's Store. Gee whiz, the smiles abound and one can almost feel the group's enthusiasm to re-engage the stalled efforts of the former litter brigade. Bill Weber cheered the group on and plied them with free goodies like bacon, cookies, chips and other items all to expand the group's waistlines. No, the product on the rear wall wasn't part of the deal, but with a group like this, who needs the booze? 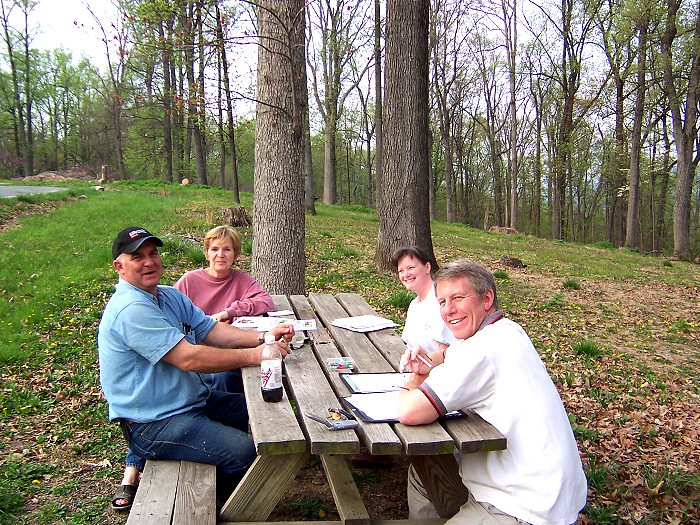 BRILLO's Second Meeting-4/19/2005
The group enjoyed a breath of fresh air at one of Bill Weber's convenient picnic benches which was also coincidentally the first meeting site of the Shannondale and Beyond gang. 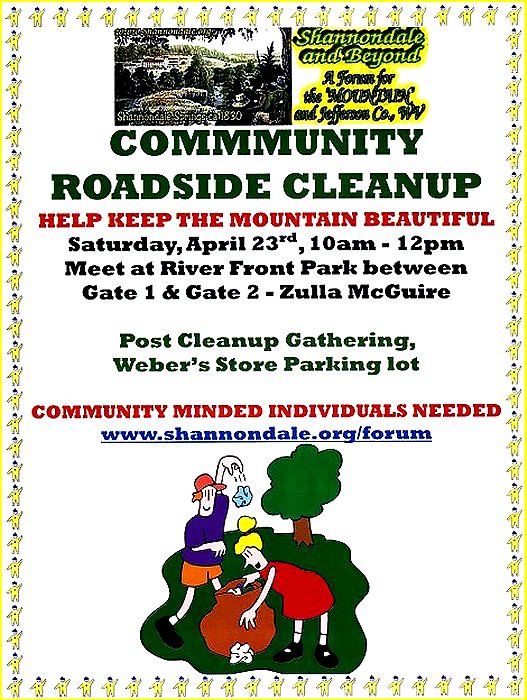 ...prepared and posted, adverts sent out, and even iron on transfers...

offered for our HONCHOS boded well for the anti-litter enterprise and the stage was set for the first litter pickup!

OOPS!!!
Despite the planning and execution...a lesson was quickly learned.... don't trust the weatherman! The weather forecast was dreadful with a promise of a wet, cold, rainy day. The decision to cancel was delayed until the last possible moment.

Yep, you've probably already guessed it.....the dawn broke, the sun was shining, and the temperature was ideal for the nasty work of cleaning up litter! So the two biggest lessons we can pass along to those who follow:

1) Don't listen to the weather man and be put off by nasty weather predictions...that's why ponchos were invented.

Although a June attempt was made. ...the Project was ultimately put off until the Fall with surprising and excellent results as you'll soon see.

The Plan
Even though the plans for a June pickup fell through, progress continued as Willis and the S&B technical guru Tony developed a litter site map based on experience gleaned from the planning of the April Oopsie. The map annotated where people/vehicles/equipment could be safely assembled and included:

1) St Andrews
2) The southern entry to John Brown Ridge Section
3) The Gate 1 pull out
4) The Gate 1 Mailboxes
5) The foot of Johnson Hill
6) The Gate 2 Mail shed
7) The open area across from Shannondale Springs Rd
8) The Gate 3&4 Mail shed, and
9) Webers Store 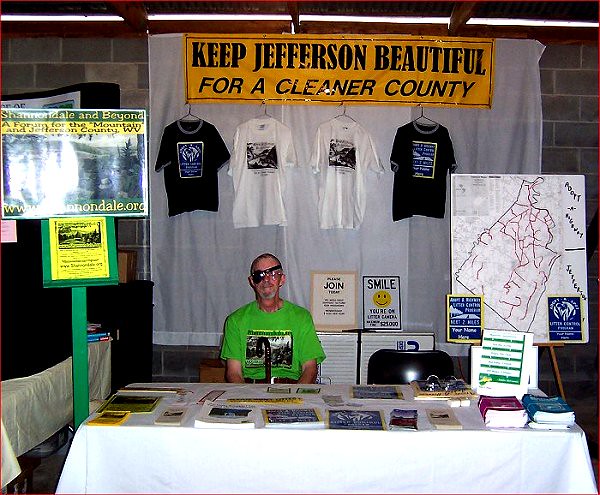 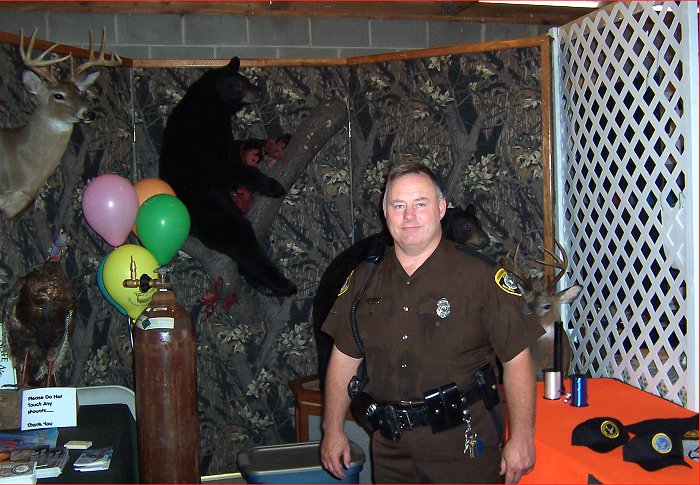 Although the pickups were delayed progress continued with Willis visiting the fair as a guest in a space shared with the Keep Jefferson Beautiful (KJB) folks. Willis had been to the fair many times over the years as a spectator, sanitarian inspecting the food stands, and an exhibitor in the needlework area. But to sit in a booth and get to schmooze with the public was a great opportunity to spread the word about S&B and our yet unnamed litter project. They shared a spot with the most popular exhibit in the fair, that of the Department of Natural Resources (DNR). Ken White, the Conservation Officer, is shown in the lower image along with some of his "friends". 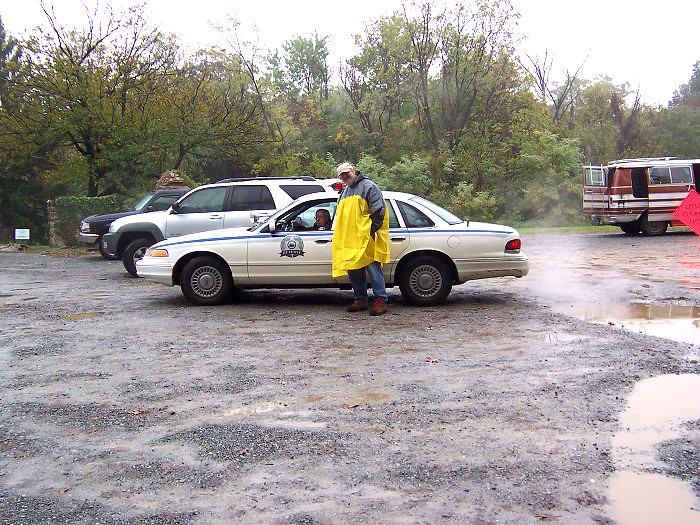 Applying Lessons Learned
Thwarted by both the false forecast in April and scheduling conflicts in June, BRILLO finally gets in gear October 24th, 2005. The Sheriff's Reserve (Andy of John Brown Farms) provided a visual presence to slow down traffic to keep our "padders safe". The staging area at St. Andrew's church provided a little pre-pickup practice for the group. Hot Coffee and sweet rolls were provided as an incentive. 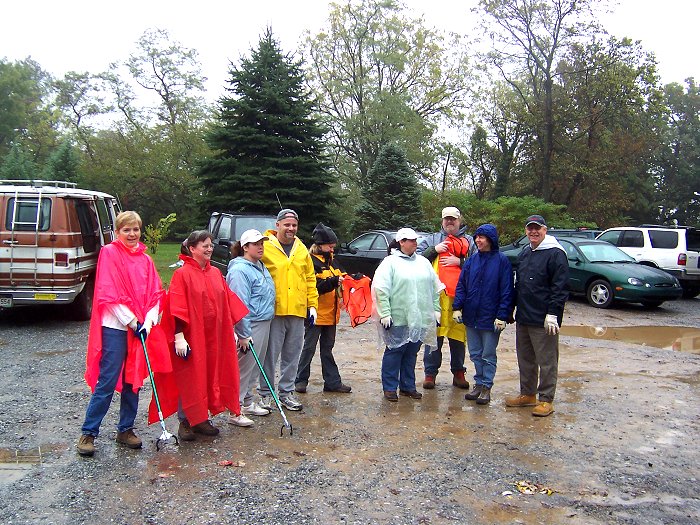 Posing Prior to Pickup
A light but steady drizzle didn't deter our valiant crew. This time we knew better than to cancel! Earlier one couldn't see the Mountain Community Center from St. Andrew's Parking lot. Remember the rule: regardless of weather, the 'padders will pad'!! 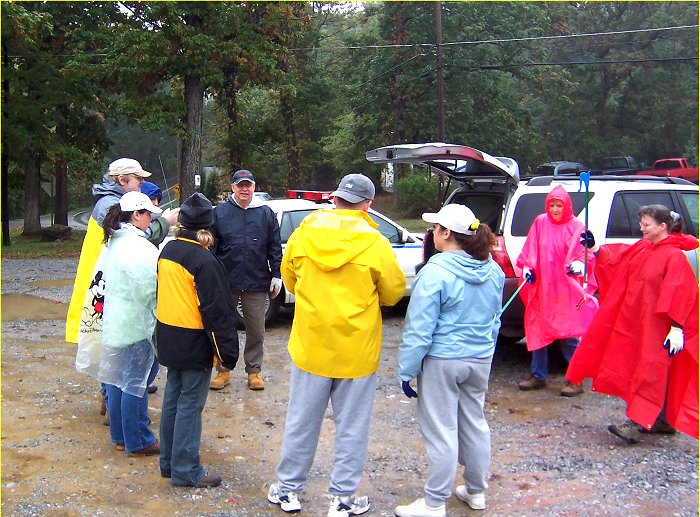 Another View of the 'Padders

Sorry about a lack of a Photo Op. ..the rain dampened any desire to immortalize the mounds of trash collected. Suffice it to say the amount was substantial. Our crew was only able to complete the first 2 miles of Mission Road.

And as that porcine Looney Tunes Characters would say: "ThThThat's all folks" in the first year of BRILLO.