Our Once Famous Scenic Overlook

This view is on a post card printed by the Boston firm Tichnor Brothers Inc. They made color postcards with a linen texture dated ca. 1930-1945 concentrating on American vacation places. Their West Virginia collection has some good views of Jefferson County and is linked here: https://www.digitalcommonwealth.org/search?f[collection_name_ssim][]=Tichnor+Brothers+Postcard+Collection&f[institution_name_ssim][]=Boston+Public+Library&f[related_item_series_ssim][]=West+Virginia+Postcards&f[subject_geographic_ssim][]=West+Virginia&page=2

This view, familiar to many of us older folks, shows Snyder's or Power House Hill on the right and Little's Falls on the left. The Shenandoah River is flowing north, left to right.

Pop Quiz: Can you identify any features in the image? 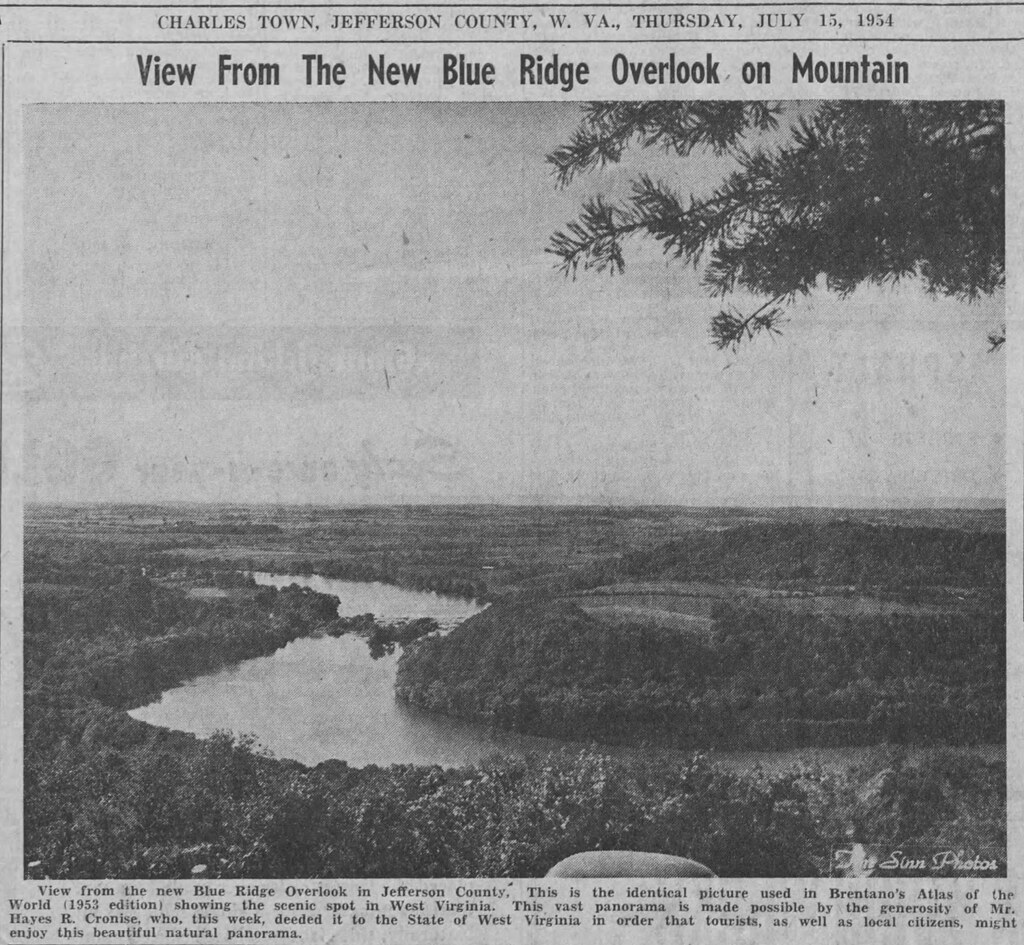 The image above, found in the July 15th 1954 edition of the Spirit of Jefferson newspaper was accompanied by the following text:

Hayes R. Cronise has this week deeded to the State of West Virginia, the land near the top of the Blue Ridge Mountain, in Jefferson County, from which a panoramic view of this end of the Shenandoah Valley is visible.Under the terms of the will the State is required to build an overlook at that point within three years, or the land reverts to Mr. Cronise. In addition to the actual overlook site, Mr. Cronise included in his deed three hundred and twenty feet from which trees may be topped, so that the magnificent view will be visible almost as soon as you come over the mountain top.

John S. Alfriend started this project when he was president of the Charles Town-Ranson Chamber of Commerce and interested Mr. Cronise in the possibilities of the site he so generously gave. Mr. Cronise stated he had long desired that this unusual view be made public and he cooperated from the outset in making it a reality. Mr. Frederick Byrer contributed the legal work connected to the deed, Montague Lippitt made the survey and Jefferson County's Delegate to the West Virginia Legislature W. P. C. Perry assisted materially in getting acceptance of the project by the State. Mr. J. Ernest Watson, County Road Supervisor, as well as officials of the State Roads Commission, were quick to register their pleasure at the acquisition of the site and assured those interested that immediate steps would be taken toward completion of the project, as funds could be made available.

Once the overlook is complete this county will have a tourist attraction second to none in the East. The wide expanse of the Shenandoah Valley, the winding Shenandoah River, the fertile fields and distant mountains all make this site a grand panorama that will attract thousands of people.

The Scenic Overlook did indeed afford a world class view. Where was this tourist magnet located? 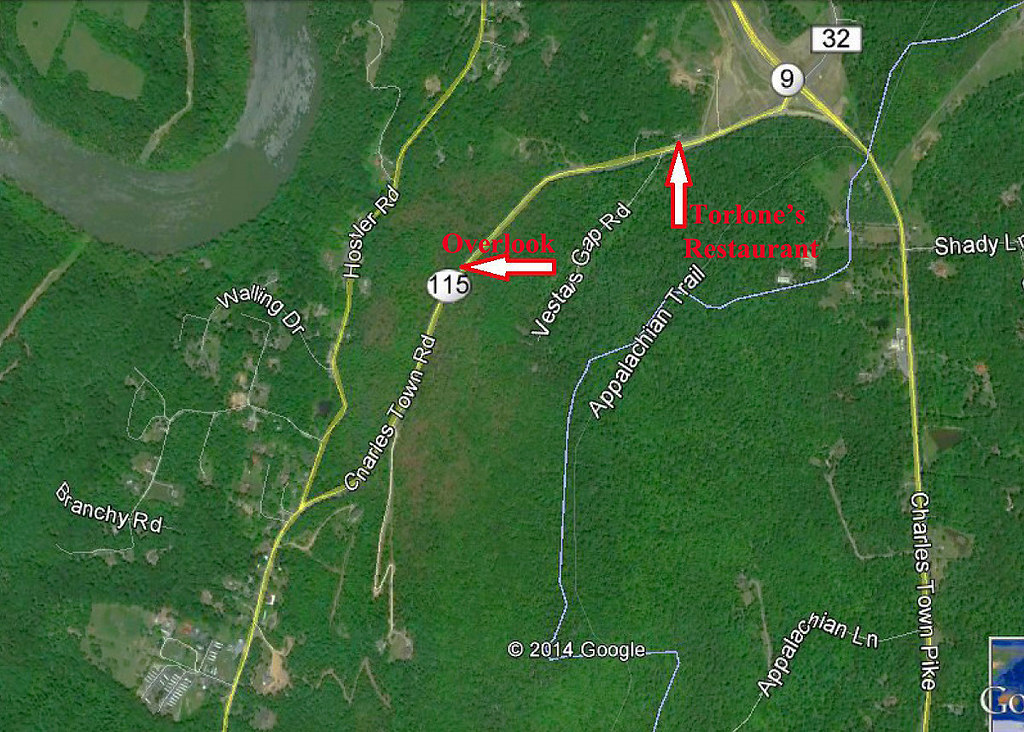 Those familiar with our area will know that the overlook used to be on what was then called Rt 9 (now Rt 115), a major entry point to Jefferson County from Virginia. about halfway between Torlone's Restaurant and the Hostler Rd. intersection. A sign used to be extant, but was removed some time ago. It's difficult to find as we'll see later. 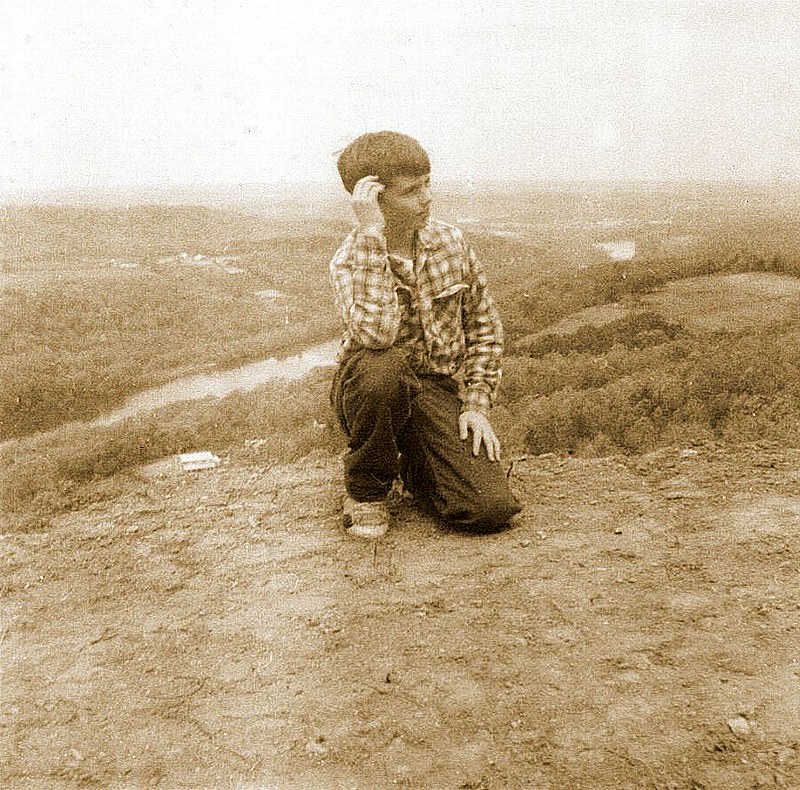 We found this photo in one of the shoeboxes in which everyone used to keep prints. It shows a young Willis kneeling by the embankment in 1957. His family made a habit of stopping at the overlook to take in the view. In its early days we wonder why we never heard of anyone driving their vehicle over the hill. On what was a major route to the County's two horse racing tracks, they were likely more than a few inebriated drivers passing by. It's amazing little Willis didn't take that tumble, too. 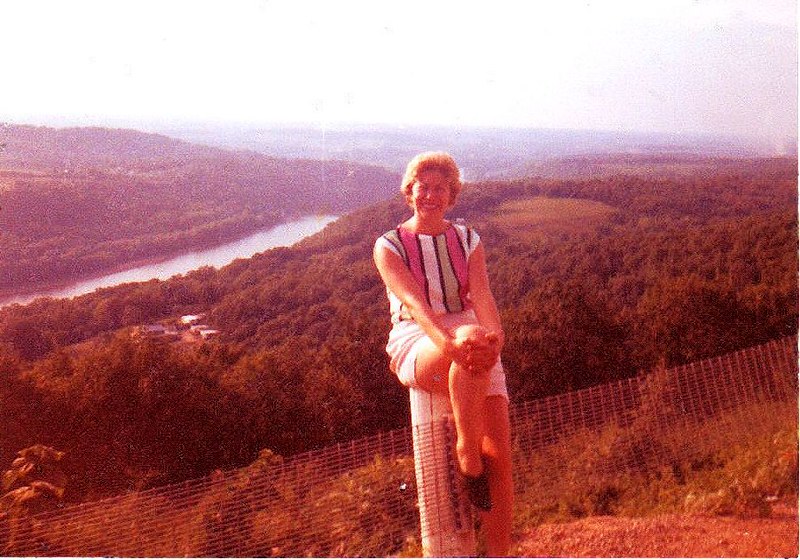 Ria was persuaded to pose in 1962. The quality a bit better here. In the distance, looking downstream to the right, you can see where the water has been impounded by the Millville Dam. That will eventually be the site of a new bridge and a more direct route into the County. In 1962, the second horse racing track had been open for 3 years. It was known for its night racing card. When the horses were running, the valley was lit up with lights.

We'll treat you to some panoramas taken in 1978. Even in cold weather the overlook was a popular spot. In addition to affording passersby with the view, the site was a popular spot for couples to wax romantic and cuddle. One of our website forum's users has stated her Dad asked her Mom's hand in marriage there. It's not surprising.

In warmer weather the the view continued to awe. In the center left of the pic you can see Little's Falls. Those rapids are situated just downstream of the site of the ruins of the only lenticular canal lock in the United States,

A canal and on the Shenandoah? While the lock wasn't part of a canal such as the C&amp;O Canal along the Potomac, it was part of a route that allowed goods to be transported downstream front the Front Royal VA vicinity Harpers Ferry and then onto points east. More photos on that lenticular lock can be found here: https://www.flickr.com/photos/[email protected]/sets/72157627777383191 and here http://www.shannondale.org/community/index.php?threads/24221/#post-280482

On the right and across the Shenandoah River in the image is Snyder's or Power House Hill. Bloomery Road ( https://www.google.com/maps/@39.2685581,-77.7836834,15z?hl=en) abruptly leaves its route going north along the Big Eddy, goes up and over the hill, descends thru that prefabricated tunnel over which the new Rt 9 travels and back along the river at the Millville power plant. More photos and information about this may be found here, http://www.shannondale.org/community/index.php?threads/16657/#post-208855 and here
https://www.flickr.com/photos/[email protected]/sets/72157622635202058/

We'd love to have more photos from yesteryear to include in the show. If you want to send them to us with a brief description, we'll give proper attribution. And additional tidbits of history and anecdotes will be welcome, too.

A closer, 2005 view of what is left of the parking area for the overlook. The beautiful view was not only a favorite of motorists, tourists and lovers, it was an ideal place for morons to dump trash, appliances, bedding, construction materials and... Well, you get the picture. It became a herculean task to winch up refrigerators, mattresses, concrete block and such from the bottom of the embankment. Needless to say, the property owner below as well as the WV Department of Environmental Protection weren't happy and a guardrail wasn't such a bad idea given the amount of traffic. So.... 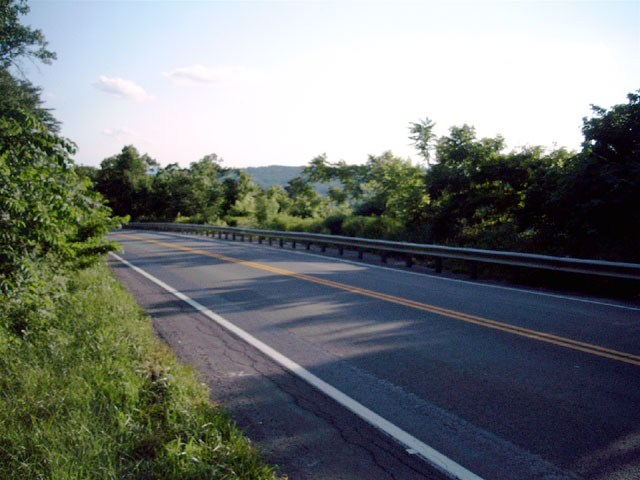 The view now depicts the final? chapter of the overlook in 2005.

Heading down the Mountain toward Hostler Rd. you may be able to see the remains of the macadam which covered the overlook's pull-off in its later days. It's a bit more overgrown in the 9 years that have passed. We'd ask for some recent photos but, we (actually our volunteer photographer) had some bad luck when this and the following two photos were taken.


We'll dedicate this part of the story to him, Tim West, who is still on our books at Shannondale.org as a forum user. We haven't heard from him since April of 2006.

Tim saw one of the Shannondale.org signs we used to have along the road and was prompted to join and ask innocently about why there was a Scenic Overlook sign but no evidence of a view. We explained some of the history and linked a slide show created earlier in which I stated, if anyone has the 'nads to walk Rt 9 in the present day and capture the scene in 2005, send the image, but not the doctor bills to me!!! http://www.shannondale.org/sca/phot...slinkedtosorg/scenicoverlookshenandoahrt9.htm

As fate would have it, Tim accepted the challenge and after posting the photos he took, he posted a followup.

]"Willis said he would not want to pay anyone's hospital bill though...After hiking down to the site and snapping some pics and was on my way up the other side of the road. I heard a car coming but it was some distance away - I thought I could make it just fine if I trotted across the road. I went to push off on my left foot and did so. I heard and felt two POPs in my leg in quick succession, POP POP and my left leg became about useless. I almost fell in the road but the idea about being hit by a car did not appeal to much to me.

I got to my truck and knew this was no muscle pull. I got to the ER at Jefferson with great difficulty ( I drive a stick ) and there was diagnosed as tearing my major left calf muscle almost in half. So here I sit, Score MOUNTAIN 1, Tim West 0..."


...Willis's middle name must be Kreskin. His prediction of hospitals, an eerie foretelling!

Tim, wherever you may be, you get a hero's treatment from us! 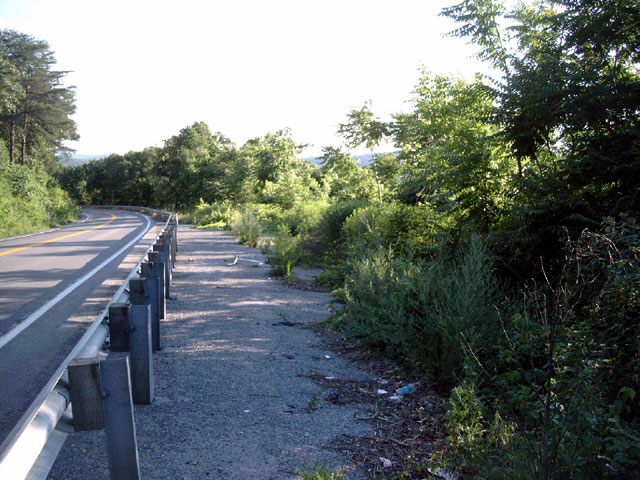 A closer, 2005 view of what is left of the parking area for the overlook. The beautiful view was not only a favorite of motorists, tourists and lovers, it was an ideal place for morons to dump trash, appliances, bedding, construction materials and... Well, you get the picture. It became a herculean task to winch up refrigerators, mattresses, concrete block and such from the bottom of the embankment. Needless to say, the property owner below as well as the WV Department of Environmental Protection weren't happy and a guardrail wasn't such a bad idea given the amount of traffic. So.... 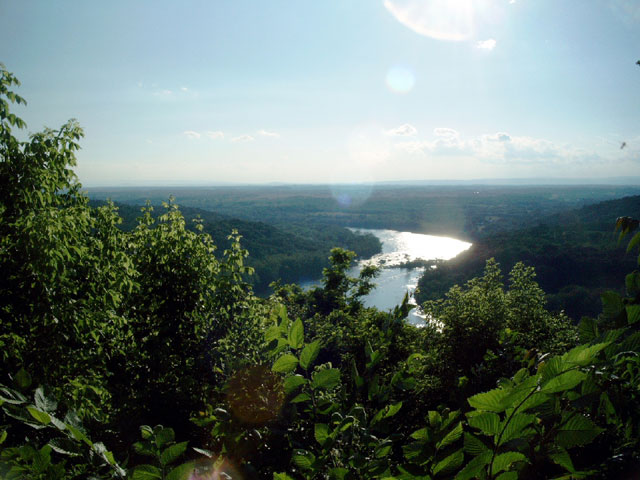 Tim took a photo looking southwest and the view was still there. But he paid a high price to get the shot. You could still see Little's Falls. We suspect that the undergrowth has grown upwards.
</ 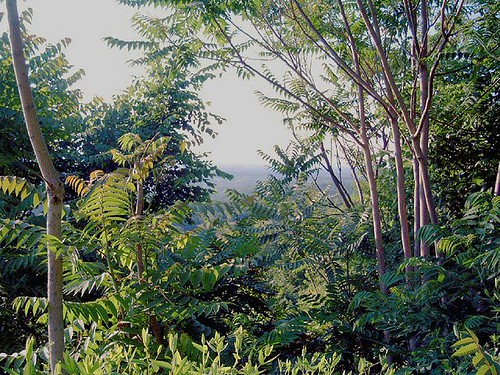 While we weren't there, this view taken to the northwest would probably be in the same direction as the pictures above in 1957 and 1962. As we mentioned before, if you have any photos of the overlook stored in a shoebox in the attic or stories/anecdotes of yours or others visits, we'd be delighted to add them here.

The fate of the overlook has been pretty much sealed, but what would you think of an incarnation (something simple like picnic tables and a bulletin board or a full fledged visitors' center) at the intersection of Rt 115, Chestnut Hill Rd, and the new Rt 9? It seems a good idea to us. You can't see the river, but the view of Shenandoah Valley as you enter West Virginia from the east is stunning.
Reactions: Dobbstar