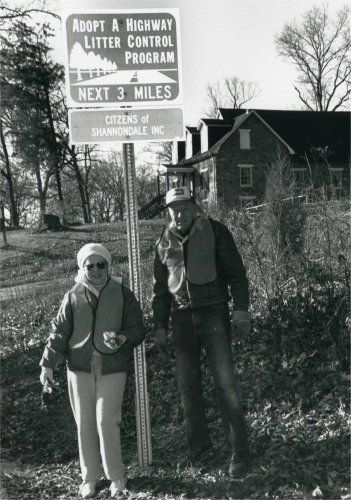 Those Were the Days

Yes, Those Were the Days, My Friends. In a 1990 photo Tom Carey and Betty Lou Bryant stand by the adopt a highway sign at the North end of Mission Road. The Citizens of Shannondale organization took over the arduous and never-ending task of trash pickup from Arthur Kriemelmeyer who had in the past spearheaded the effort with monetary support from several of the Shannondale civic groups. They, too, hoped that under the umbrella of the Citizens public education, enforcement and the pickup itself would stem the ever increasing problem of littering. In a perfect world...

The Poster Shows the Carrot on the Stick

In 1981 the poster above shows the carrot on the stick. Soup and crackers!

Periodic litter patrols also were staged by the garden club over the years - usually before the reptiles were stirring around Earth Day in April and after the frost in late October and November.

The Odoriferous Ordeal Is Over

The odoriferous ordeal is finally over, the Shannondale Clubhouse dumpsters were ready made as a disposal point. Our DOH hadn't begun to furnish gear for the pickups at this point in time. BRILLO's 'padders would correct that oversight in time.

The proud crew was able to relax in the Shannondale Clubhouse Trophy Lounge. The handsome Adirondack styled lodge wore many hats, this one being to offer succor to the weary volunteers after their fragrant foray. And GREAT news, we have a key to all the participants- We'll list them and you, the viewers, can match names to faces. Contact us if you get stumped as many of the folks in the photo have passed away or moved on. the list: Howard McIntosh, Joe Rosskamp, Wanna Phillips, John Blazek, Herman Klare, Sara Montague, Margaret Klare, Emma Gaw, June Nicolette, Harry Phillips, Lee Rosskamp, Vivian McIntosh, Margaret Stringer, Martha Smith, Arthur Kriemelmeyer Sr., Wayne Riecks, Bertye Riecks, And Eleanor Slinkman.

In 1990, Traffic Allowed a Little Leeway for Fun

In 1990, traffic allowed a little leeway for fun. And there was always a wise guy in the crowd. This isn't a new sport although we bet it could become an Olympic event in future years. What should we call it, can-bagging? Well, that's Lyle Lilly atop the embankment on Johnson's Hill while Betty Lou Bryant tries to avoid oncoming traffic. Dedication like this deserved a gold star. Note the lack of guardrails.

A New Guardrail Provides Protection in 1995

A new guardrail provided protection in 1995. Chris Juel( is that the correct spelling, Chris?) tempts fate as he collects the litter strewn along "Johnson's Hill". To those who may not have been back to the 'dale in many years, the Ess curve on Johnson's Hill was largely removed and a guard rail installed to keep vehicles from tumbling down the resultant embankment. Bob Warfel to whom we give thanks for these photos may not tout his photography, but we sure are impressed with the lines in this shot!
Reactions: Dobbstar