The Bloomery Of Bloomery Road

On Friday, May 9, 1760, George Washington "called at the Bloomery and got Mr. William Crawford to shew me the place that has been so often talked of for erecting an Iron Works upon.".

He didn't say Vestal's Bloomery or Mayberry's Bloomery or just "a" bloomery, so evidently on that drizzly morning the Bloomery was quite a place—at least for the sparsely settled frontier that Jefferson county was then. Yet no one apparently thought enough of the Bloomery to leave a description of it so today we have only the name "Bloomery" and two patches of black earth from which to reconstruct a picture of the place where Washington called.

We do know that Thomas Mayberry agreed to erect a bloomery for making bar iron on the William Vestal Plantation about 1742, and ten years later there was mention of a road from Long Branch to the Vestal Iron Works. At that time iron was desperately needed in the Colonies. British laws restricted its manufacture and most of the known ore in Virginia belonged to Lord Fairfax who demanded a ruinous one-third of all ore mined for himself. Mr. Vestal, knowing he had good ore on his plantation and knowing that there was a good market for iron, evidently engaged Mr. Mayberry to build an iron works for him.

Mayberry could not order a furnace out of a catalog, but had to do with what he could find on the estate and make with the few tools at hand. He even had to pick out the place for the iron works. The ore was on the river bank several miles upstream from the site he selected. Wood for the making of charcoal, there was aplenty everywhere, for the forests were then almost unbroken. The third ingredient for a colonial iron works, power for the bellows and hammer, he found on Evitts Run. He chose the location at the mouth of the stream where the fall is rapid and close to the river so he could float the ore to the bloomery on flat boats.

(Note: The accompanying rough illustrations will give an idea of how Vestal's Bloomery may have been built and its crude operation.) 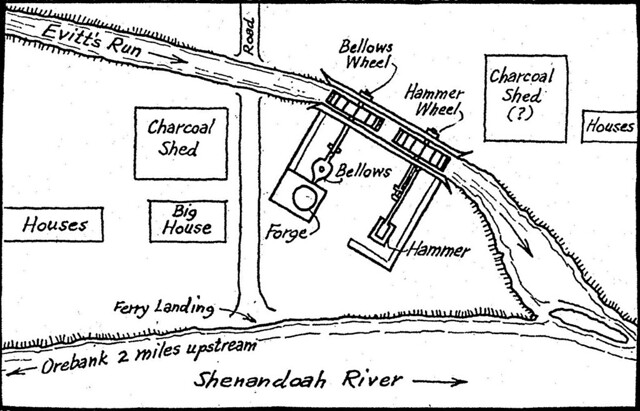 The bloomery itself was nothing but a large blacksmith's forge several times as big as those we still see here and there about the country. The fire pot was rather deep. In it the smith built a hot fire of charcoal fanned by a large bellows run by water power. Over the charcoal he heaped the ore, adding more charcoal and more ore as the heap melted down and always keeping up a strong blast, for air aplenty was needed to keep the fire hot. An ordinary fire of wood or charcoal without an air blast would not reduce the ore to iron.


The chemical action of the bloomery was simple. The ore was an oxide of iron, the same thing as rust. In the hot fire the charcoal—carbon—united with the oxygen of the ore to form carbon dioxide gas, leaving the iron. The bloomery fire could not be made hot enough to produce molten iron as the blast furnace does. The iron formed a plastic, white-hot mass full of impurities. To make it into usable bar iron the impurities had to be hammered out.

The second step of the process was even more important than the reduction of the ore, for the sponge iron was worthless until it was made into bar iron.

When the mass of iron was big enough the smith wrapped it around a stout pole — of green wood so it wouldn't burn too quickly — much as dough is wrapped around a stirring spoon. This glob of metal was put on an anvil and beaten with a huge hammer. At each blow sparks flew in all directions and flakes of slag fell off. The bloom gradually became solid. When it cooled the smith reheated it in the forge. Then with poker and tongs he put it under the hammer again and again until no more slag could be beaten out of it and he had a fairly good bar of what we call wrought iron. "Wrought" simply means worked. The iron was sold to blacksmiths who made it into tools, nails, hardware, guns, horseshoes, wagon wheel tires and so on.

Obviously, to make iron by hand power was costly in frontier days when it was hard enough to feed a family by farming and hunting without trying to feed a lot of men who did nothing but hammer all day: The difference between a bloomery and a blacksmith's forge was that water power was used to run the bellows and hammer instead of man power.

Just how Thomas Mayberry obtained the water power of Evitts Run is not known. However, bloomeries had been operated for nearly a thousand years since the Spaniards of Catalonia first developed them. The proper name of a bloomery was a Catalan Forge. The name "bloomery" came from the bloom of sponge iron much as our word "beanery" comes from a Boston restaurant. Mayberry probably knew of a variety of schemes to hook up the water power. He probably did not build a dam, head race, flume, and overshot wheel much as we usually see at old mills —at least not at first. More likely he used an undershot wheel in a swift channel more or less confined by rocks. He probably used two wheels, one for the bellows and another larger one for the hammer. It was common to have a separate water wheel for each device in those days before elaborate machinery was invented.

The arrangement for the bellows was fairly simple. As the water turned the wheel, two heavy lugs on the axle alternately raised and lowered a long beam. The beam was hinged at one end and at the other attached to one side of a large bellows. The bellows was just like the familiar fireside or blacksmith's hand bellows only much bigger, perhaps ten to twenty feet long. The air pipe from the bellows blew into the forge near the bottom.

The forge hammer was a more elaborate device. Probably it was similar to the bellows machine in having lugs from the water wheel axle raising a long hinged beam. However, once the beam was raised the lugs were so arranged that it would drop fast to strike a hard blow. This could be done by having a long axle from the water wheel extend into the building. The hammer beam lay alongside the axle so that the lug came up under the beam and after raising it turned out from under it to let it fall. Pictures of early hammers show that they usually also had a spring beam over them to give them more of a wallop. The lug would raise the hammer beam handle, if you can imagine a handle a foot or more square up against the spring beam. Then when the lug turned out from under the hammer beam the spring beam sent it down with a full whammy. The hammer head was made of iron and weighed several hundred pounds, so you can see that a bloomery hammer was nothing to hit your thumb with—not twice anyway. 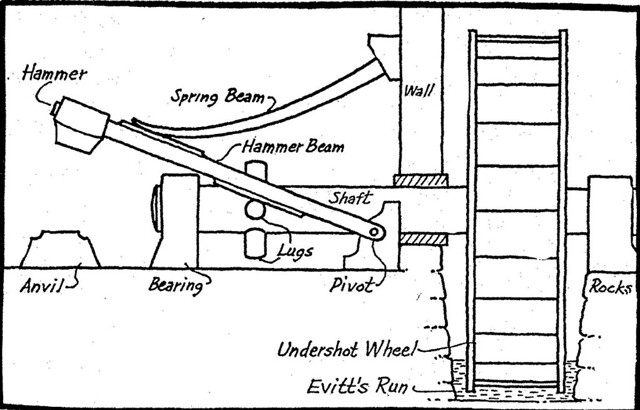 Mr. Mayberry may have used another type of early hammer that sounds like a Rube Goldberg scheme but which was actually used in certain places where a water wheel couldn't be used. This device was a big seesaw beam. At one end over the anvil was the huge hammer. On the other end was a large water tank that had a quick acting gate in it. Water ran into the tank from a high level flume. When it held enough water the tank went down and the hammer went up and stayed up until the smith was ready for it to drop. When ready for the wallop, he signaled his helper who yanked open the gate. The water spilled out and the hammer fell. The gate had to be arranged so as to close by itself.

From this crude machinery the Bloomery made the first iron west of the Blue Ridge. Probably the works were improved upon using the iron made there for the better machines. Quite likely overshot water wheels were used later for they would provide more power for the bellows and hammer.

Even with iron available it was too valuable to be used much on heavy machinery. Practically all of the water wheels, bellows, and hammers were made of massive timbers. The axle of the water wheel was a large straight tree trunk. It turned in cradles of hardwood or stone and probably screeched to high heaven as it turned.

The forge and hammer were probably enclosed in a building about as big as a small barn. A substantial building was built for the supply of charcoal—probably separate from the bloomery itself because of the danger of fire from the hot sparks. It is unlikely that the charcoal was stored out of doors as it didn't keep well in the weather. Several houses for the workers completed the settlement. Most of the workers were colliers whose job it was to make charcoal in the woods. A few men could dig the ore and boat it down to the bloomery. Only a few workers were needed at the bloomery itself, for the water did most of the work. As M. T. Thomson of the U. S. Geological Survey points out, the Bloomery was an excellent example of how the early settlers of Jefferson county used her water resources to advantage—for transportation of ore and for power to make the iron.

The Bloomery was probably not active for very many years, as it was supplanted by the blast furnaces that made cast iron. The blast furnaces such as those at Shannondale that George Washington went to see about on that May day in 1760 were much more efficient than the early bloomeries, yet a bloomery of a modern type was still in operation in the United States as late as 1900. The early variety, however, soon died out, not because the ore or water power gave out, but because the forests gave out. As much as 400 bushels of charcoal had to be burned to make a ton of iron in a bloomery, and the forested hills of Jefferson county could not supply even one bloomery for long. 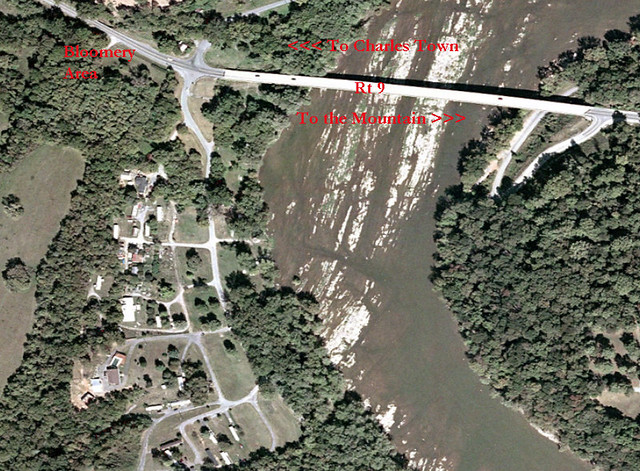 (Note: To locate the Bloomery in the above story, its original site was at the left of Route 9 going southeast from Charles Town, and just before entering the Shenandoah River bridge, and near where Evitts Run crosses under the highway.)