In the early 1700's, William Fairfax became the owner of 29,000 acres of the Virginia Colony. The land was referred to as Shannondale. Early in the area's history it became known that copious deposits of a superior grade of iron ore were present and readily available. That fact, in conjunction with the presence of the area's convenient proximity to two rivers made the area highly desirable for iron production. The Harper's Ferry area became more than attractive to iron workers and craftsmen of iron. 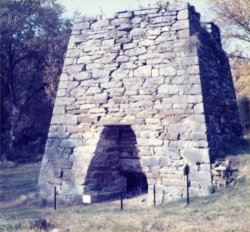 With the growth of the iron industry came the pressure to improve transportation to facilitate the delivery of the iron to its market. In the late 1700's work began on a waterway, known as the Potowmack Canal, to mitigate the difficulties of navigating the turbulent waters at Harper's Ferry. Iron's availability, the presence of craftsmen, and the improved transportation combined with George Washington's familiarity of the locale made his directive to establish a Federal Armory in Harper's Ferry in 1794 inevitable.
Around 1839 two entrepreneurs, Perdue and Nichols built a furnace about a mile South and adjacent to Shannondale Springs along a stream now eponymously named Furnace Run.This stream empties its waters into the Shenandoah River just downstream of the river's "Horseshoe Bend". The operation included a receiving area for raw materials, a stone furnace to provide heat for the process and western wing for the storage of the finished "pigs" of iron. Up to three tons of pig iron were produced daily during the industry's heyday during which the operation employed, housed and fed up to fifty men.

The Shannondale furnace supplied its raw product to the armory in Harper's Ferry as well as markets downstream on the Potomac River. The venture was successfully operated until the Civil War at which time it is believed the main structures of the facility were destroyed. All that is still extant is the stone furnace stack. The area surrounding the furnace was cleared in 1975 by the Shannondale Garden Club, but has since fallen to neglect and is once again surrounded by brush and small trees.
Credit: "Historic Jefferson County" by Millard K. Bushong
"A Celebration of Iron" by Dr. Stanley K. Dickinson Ph.D 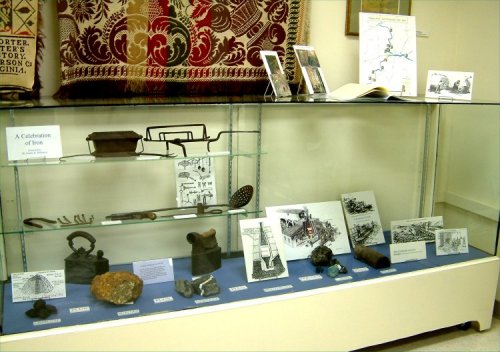 We were fascinated to see Dr. Stanley Dickinson's exhibit case when we visited the Jefferson County Museum
in 2003. We had climbed all over the big stone tower in my youth, having no clue except that it was called an iron furnace. Boy, what a surprise The exhibit has been placed in storage at the Museum as this is being typed in 2010. You'll have to learn from our little presentation here. Get to know that great, big, stone, iron furnace we've got, literally, in our backyard! Thanks, Stan, for your gracious acquiescence.

The Equation of Iron Extraction

Place In a Furnace

This simple equation: iron ore heated by means of a fuel (charcoal) with a fluxing agent (limestone) in a furnace, resulting in usable iron, is essentially the reason we don't live in Bedrock with Barney and Fred. Dr. Dickinson has put together a straight-forward explanation of each element of the equation which we will attempt to pass on to you intrepid viewers without "dumbing it down" too much.

The Ingredients of the Recipe Explained 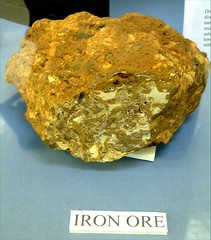 In Jefferson County, the ore of iron that was discovered was the oxide limonite. It resulted from the interaction of iron laden water and limestone rock. This combination was made possible by a fault, or detachment in the rock strata that roughly followed the Shenandoah and Potomac Rivers from 200 miles upstream on the Shenandoah to well into Pennsylvania.
Charcoal 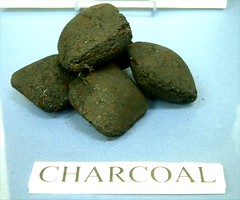 Charcoal was the fuel used in this area to fire the iron furnaces as no coal was nearby. Hardwood was "charred" by minimizing the amount of oxygen that would cause the wood to burn. Lengths of hardwood were stacked, ignited and covered with earth. A collier, the person entrusted with the production of the charcoal, had the arduous task of tending the pit to make sure that the wood charred at the proper rate. The process consumed vast amounts of wood and large areas around the furnace were deforested, up to an acre a day at the larger furnaces such as Shannondale's.( Note: Dr. D. wants you to know that the charcoal produced didn't resemble the briquettes used as a prop in the exhibit- you guys knew that, didn't you??)
Limestone 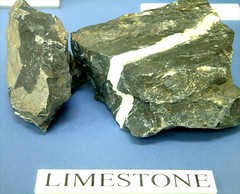 There is one thing in this area on which you can depend and that is an abundance of limestone. Geologists refer to this area as The Great Limestone Valley of the Shenandoah. Limestone is primarily calcium carbonate which is crucial in reclaiming the iron from its ore. It acted as a flux which meant it reacted chemically when heated to reduce the temperature at which the iron would separate from other matter in the ore. Further, it caused impurities to float above the molten iron resulting in a much more pure product.

A Container to Hold the Ingredients
The Furnace 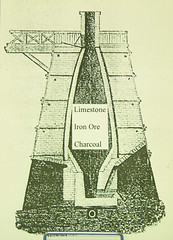 This illustration simply shows how the ingredients were stacked inside the furnace. It was loaded from the top and the finished product was issued from the bottom. A "REALLY NEAT" diagram showing a furnace (similar to or maybe actually Shannondale's) in action is coming later. It provided amazing insight into how that old stone stack actually worked. We were IMPRESSED!! 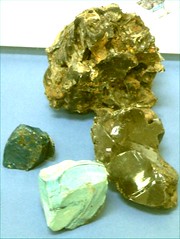 Slag was the waste product that was created when the impurities were separated from the iron with the help of the flux, limestone. To keep the furnace in continuous operation, the slag had to be removed periodically. In a molten state, the material congealed upon contact with air to form a glass-like substance. Because of varying impurities in different localities, the slag varied in color from green to blue to the dark obsidian hue from the Shannondale furnace. We can recall collecting the "glass" from around the furnace in the early days of the Club. It is quite beautiful.

Dr. Dickinson concludes his discussion of the Iron Equation with the statement, "So, finally, this is what the work was about". The "pig" of iron would be shipped to a forge or mill where it would be rendered into a product of practical use. And the good doctor answers the age old question, "Why is it called a pig?". The drawing of the furnace complex that will be seen next shows shallow trenches in a sand bed feeding off a main line. These trenches line up much as piglets nursing a sow. Voila', we have pig iron!!!

A Cold Blast Furnace Depicted in Action
Click the Pic 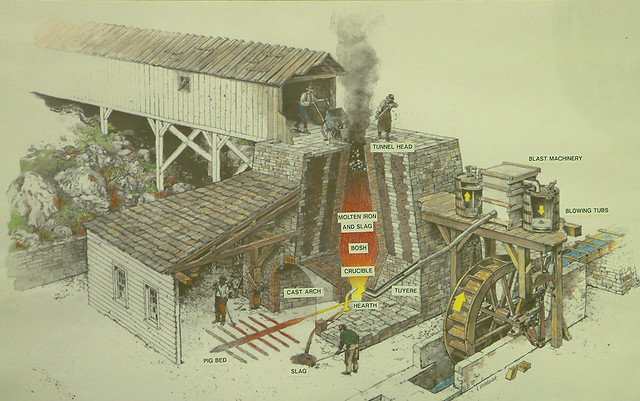 Two conditions were required in a furnace site in Jefferson County: access to a stream of water to turn a waterwheel and a hillside to facilitate loading of raw materials (the ingredients of the recipe) into the furnace's stackhole. The waterwheel could be of the undershot type as shown or overshot where the water turned the wheel from above. It powered the vertical (shown) or horizontal bellows. The bellows forced air at ambient temperatures (cold) through decreasing diameter tubes thus increasing its pressure (the blast) to intensify the heat of the fire. The ramp arrangement from the hillside would be similar to the operation of the Shannondale furnace. The workmen constantly fed the raw material into the furnace stack as directed by a furnace master. The pigs of iron can be seen filling in their bed . We hope you, the viewer, can see why we were so excited to be able to present this information on the our website. It puts the life back into that big pile of stone just below and across the road from Shannondale's Gate 2 entrance. 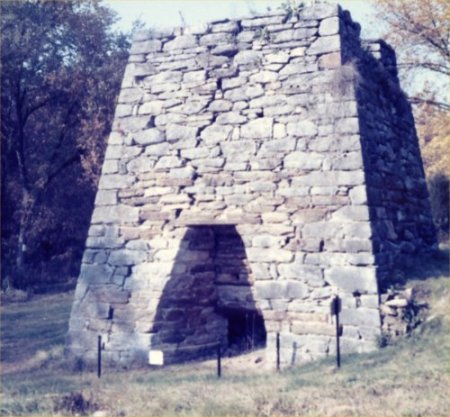 As a result of a Shannondale Garden Club Project, the furnace was cleared of small trees, undergrowth and brush. Efforts were initiated to obtain historical status for the site, but the effort never came to fruition. 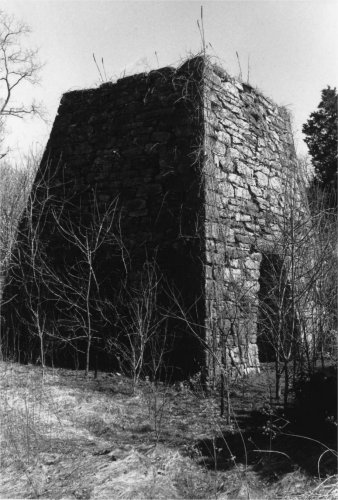 In 1989 we see the start of its decline from the laborious efforts of restoration undertaken by Shannondale's Garden Club. We could wax poetic with phrases like "A Silent Sentinel" or "Drifting into the Fogs of Time" but the bottom line is- It's a shame that someone can't restore the furnace to the condition of its heyday.
Click the pics for a larger view 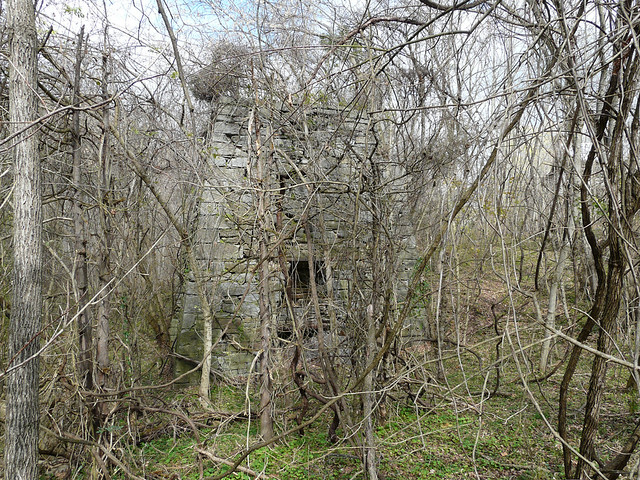 The furnace shows the results of neglect over past years. Most of the residents of our Mountain are unaware of its existence. This and the following photo taken by E. C. Field in November of 2010 (posted on his Blog: Come Share Your Mind-Light!) demonstrate why it remains unknown to many. The massive stone chimney blends into the forest as though someone had given it protective coloration. 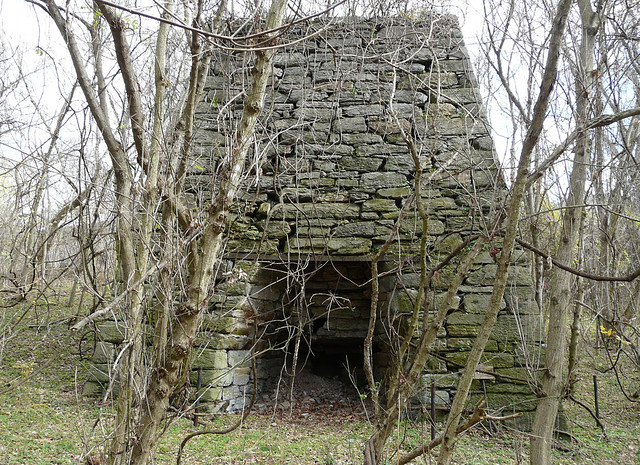 The structure itself remains in fairly good repair, but its history in the minds of its neighbors is deteriorating. We, the editors and viewers of the Shannondale and Beyond, applaud the efforts of Dr. Stanley Dickinson to keep the history alive!