In 1886 a few young men*, communicants from Zion Episcopal Church in Charles Town WV, began a Sunday School in a schoolhouse east of the Shenandoah River and southeast of the city. The area was near Mannings, a community at the toe of Jefferson County's Blue Ridge Mountain. The young churchmen's rector, the Rev. Dallas Tucker, was convinced and enlisted to hold services there. Through the efforts of Dr. Tucker and several laymen at Zion, money was raised and in 1889, a chapel was built with the help of local residents. This was the birth of the Episcopal Mission, St. Andrew's on-the-Mount. 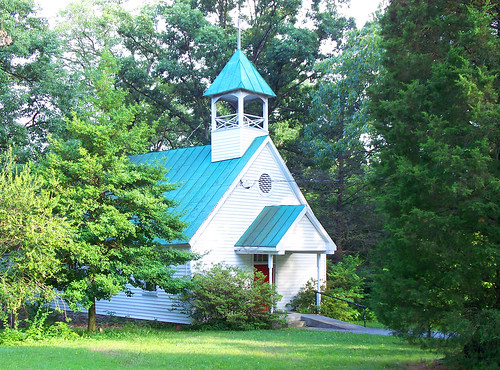 In 1903 a worker's residence was constructed and a fine stone parish hall was erected in 1904. The grand opening included a brass band an what must have been, in 1904, a large majority of Mountain residents 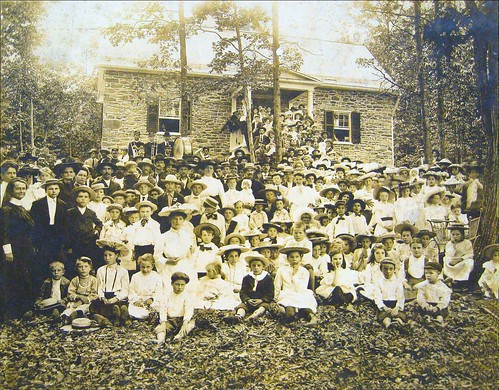 Click the Pic for a LARGE View. Can Anyone ID Their Forebears?


These improvements were brought about by the efforts of the Archdeacon of the Diocese, the Venerable B. M. Spurr and the contributions of friends of the church. Such was the beginning of the present Mountain Community Center, aptly named in its early days as Spurr Hall.


For many years the Mission maintained a day school in the stone building. But in 1929, the Mountain was “opened” to the outside world when a bridge was finally constructed across the Shenandoah River on the Charles Town Pike (Rt 9) and giving vehicular access from the west to our eponymously named Mountain byway, MISSION Rd. Prior to that the access had been by horseback, ford and ferry. The school was then rented to the Board of Education as a public school until 1935 when the board built a school in Mannings and Spurr Hall reverted to use as a parish hall again.


In those early days St. Andrew's was served by a series of clergy, laypersons and deaconesses The personnel included lay-worker and teacher Miss Deana McRae. Services conducted by a student from the Virginia Theological Seminary, Mr. Richard Trapnell who also served at Christ Church further south on the Mountain. In 1910, the Rev. A.B. Mitchell of the Nelson Parish provided ordained ministry and Miss Hallie Dorsey served as a layworker and was director of the school in the stone building from ca 1911 until 1927 followed by Deaconess Agnes Bradley who left in 1930.


The Mission experienced its greatest growth during the depression years and into the Second World War. In 1930 Miss Florence M. Cowan and Miss Dorothy Groff arrived from New York. They had expected to be stationed at Smoke Hole (near Petersburg WV) but were sent to St Andrews “temporarily” for an assignment that lasted nearly 12 years. In 1942, because the Diocesan authorities felt the Mission was ready for a resident clergyman, Miss Cowan and Miss Groff left St. Andrews and the Reverend Temple G. Wheeler was called from Romney.


When Rev Wheeler arrived he was accompanied by his wife, Helena, a nurse by training. They became not only occupied with ministering St. Andrew's but also operating a “Childrens Home” using Spurr Hall as a dormitory. The Reverend and his wife became affectionately known as “Mom & Pop” Wheeler over the years. Rev. Wheeler held services and cared for the children at the Mountain Mission until the Spring of 1945, when the 11 boys and girls began to put a strain on the stone building. They moved to the west side of the river just north of the Shenandoah River bridge and opened the Children's Haven for abused and homeless children, while “Pop” continued to hold services at St. Andrew's.


An interesting sidelight: During the Wheeler's relatively short residence at St. Andrew's, a Miss Arline Davidson, who had been playing the organ and teaching at St. Marks in Berkeley Springs, arrived for a week's stay and remained permanently . She was a superb educator, organist and a a grand role model for the children as she was totally blind. She went on to the Children's Haven with “Mom and Pop” and continued to accompany hymns at the Mission.


When the Haven closed in the early 1950's, lay readers conducted services, the bulk of which were performed by Robert Appel, a dedicated churchman whose grandmother had originally donated the land to the Diocese and whose Father and three uncles had built the church with their own hands. By 1957, many of the folks who had been born and raised on the Mountain drifted away from St. Andrew's and toward churches of the Pentecostal faith. The decrease in congregation caused the church to become an unorganized Mission and it closed in 1957.


Note: There are some small gaps in stewardship of the church during the late 30's and early 40's. Several ministers briefly came and went and church records in the Diocese may hold some records. Some names are known such as a Mr. Hibbert and a Captain Smith.

I would love to share more information with other descendents or people interested in the Appell, Smallwood or Johnson families in the area.

St Andrews Mission is a very significant part of my family's history. Robert Appell was my grandmother Dena Appell Lancaster's brother. It was my great-grandfather James Appell and his brothers who are referenced as having built the church. It would have been my great-great grandmother Elizabeth (or Bettie) Appell who donated the land. She was a Smallwood before her marriage to my great-great grandfather John Appell.

Willis - 06-04-2013, 11:00 AM
Great first post, Rick. Tho I'm not related to the families you've mentioned, I'm very interested in the St. Andrew's on-the- Mount's history partially because of my parent's involvement in its "second" incarnation and also because of its major role in our Mountain's history.