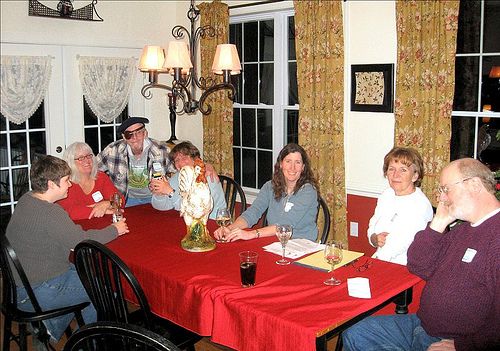 In March the group had its preliminary meeting

One of the occasional outings sponsored by BRILLO is a wildflower walk conducted by our well-known local naturalist, John DeMary. Don't miss the next trip.

John gives the adventurers a briefing

In April BRILLO hosted Edward Marshall of the Journal to get a little PR for our group. The article is linked HERE.

Brillo had plans to fan out along trashy side roads if time and volunteers permitted. Unfortunately Mom Nature would have a say in that matter.

Up went the banner and plans were changed this time around to schedule two successive days instead of two weekends.

Stan gave out assignments. You can see from the ground and our attire, that Mom Nature provided rain.

Two of our volunteers at the south end of BRILLO's stretch of road.

The usual "presents" from irresponsible hunters. Why they put the carcasses and innards in plastic bags is one of the mysteries of life.

The Gate Two mailbox cluster is a favorite of trashy slobs.

It seems that every pickup includes a commode.

BRILLO Continued it's Earth Day contest for youngsters. This time with 1st and 2nd graders from Blue Ridge Elementary. Although homeschoolers were invited, no entries were received from that group. Only posters were solicited this year.

The news release to the papers follows.

Congratulations to the Blue Ridge Elementary First and Second Grade students selected as winners in this year's Earth Day contest sponsored by the Blue Ridge Litter Look Out (BRILLO) group (Shannondale.org/brillo). The students submitted artwork to portray the contest theme of "Global Cleanup Starts at Home". Over 100 creative entries were judged by members of the BRILLO group. First prize winners received a blue ribbon, award letter and a coupon for a free meal donated by Chik-Filet. Second and third prize winners received ribbons and award letters. This is the second year the contest has been sponsored by BRILLO to celebrate Earth Day and create and interest in our youth in protecting our environment.

Award winners are as follows:

BRILLO continued its collaboration with Keep Jefferson Beautiful at the County Fair. Our 9933 was a dynamo, handing out fliers and information.

One of our pet peeves is the signs that remain long after the organization that adopted a particular piece of road has been long gone. Our idea was to ask the DOH if it could supply an overlay to see if some other person or group will step forward.

Our Fall Pickup-Some of the pretty ones

And with the exception of the young lass in the rear, the really ugly ones.

We've got the couch and chair and even a satellite dish, but the trashy knuckleheads didn't leave a TV