Jefferson County's First Hospital
Note from the editors:
The article comes from the sesquicentennial issue of the Jefferson Republican, dated September 20th 1951. we reproduced it verbatim with the addition of a couple of extra photos. We'll include a blurb at the close of the article about where you can get more information. As is our custom, we're simply offering this as a way to get you interested in local history. We'd surely appreciate any additional material. You know how to get in touch.

In these days when the password in Jefferson county seems to be "History and Progress" it would be a grave mistake to overlook the story of Charles Town General Hospital, because its history from its beginning, through its struggles and even to its outstanding accomplishments and progress, is certainly a parallel to the history of all Jefferson county. It was in December 1904 that the second floor of Dr. Richard Venning's home (shown) above was converted for use as Charles Town's first hospital. Conversion of this part of Dr. Venning's house provided five bedrooms, one bath, an operating room and a sterilizing room. Shown in the picture standing of the from steps of the first hospital are: (in front) Miss Valley Markle, Mrs. Bates Hammond; center row, Miss Anna. Hughes, Mrs. Pearl Warming, Miss Laura. And standing in the background are Dr. A. O. Albin and Dr. Richard Venning.


While the history of the hospital does not extend as far back through the years as does that of the county's, the manner in which its pioneers and supporters mastered the difficulties which seemed almost insuperable; and the many years which it has rendered devoted service to all those who came and went, have produced the same interesting story of history and progress as has the county.

ALL HAD PART IN IT

It was some 50 years ago that a group of farsighted men and women of Jefferson county had visions of a place where medical science could be practiced for the saving and lengthening of lives. And these people felt so deeply about these visions they were willing to spend their substance and themselves for it.

The need for a health center for all people pressed upon the hearts and minds of many of Jefferson county's peoples for so long the current thought seemed to spring into action, and thus came the challenge to build a hospital.

Those first souls who pioneered the bringing into being of a hospital showed the same courage, vision and stamina as did the pioneers who came over the Blue Ridge mountains and settled Jefferson county.

Of course the early pioneers of the hospital did not visualize a living institution such as stands today. But neither did the first settlers of the county visualize the tremendous progress which the county has made in the past 150 years.

But like the settling of the county, those early pioneers of the hospital movement planted the seed and it has grown steadily and soundly into a great humanitarian institution that has become dear to the hearts of the living and also of a goodly number who have passed on. Those who conceived the idea and worked for its development to realization, had faith in their project and were not mere visionaries, but rather leaders and workers.

These early pioneers of the hospital were not praise seekers, even though they did merit it. They were serving so that all could live longer and happier lives.

Many of these people had watched for years how the injured, sick and lame had to be cared for with no facilities for so doing. They had seen how people had died because of the lack of these facilities.

Then shortly after the turn of the 20th Century a new word became almost the by-word in medicine—"operation."

At first the word brought fear into the hearts and minds of people. And it was partially this fear; plus the great desire to give their all to restore health and to continue life for the happiness of all mankind which made these people accept such a big challenge at a time when conditions were most trying.

A half century ago when men, women and children were stricken with an illness or injury which required a surgical they either died because such could not be performed, or nature corrected the situation in time.

Early in the 20th Century, however, doctors in Jefferson county, and in the section generally, began performing emergency surgicals. But they had to be done under the most trying conditions. And often they were not too successful because of the lack of facilities for such medical treatment.

Back in those days when illnesses were diagnosed as operative cases, the late Dr. A. O. Albin and the late Dr. Richard Venning of Charles Town and sometimes the late Dr. C. C. Lucas of Kearneysville, were forced to perform their operations in private homes.

Usually the kitchen or dining room table in the home would serve as the operating table and the facilities in the kitchen of the home were used for sterilizing the instruments.In those days it was a familiar sight in Charles Town to see "Uncle" Lou Rutherford driving his spring wagon loaded with a wash boiler of dressings, basins and other necessary articles and a lard can filled with hot water, at all hours of the day or night over the town's streets. Yes, and sometimes it could be seen on the back country roads. Wherever it was seen usually following close behind the wagon would be a doctor.

In those days they were taking the hospital to the patient.

But by 1904 the wise and conscientious doctors of the county decided there was an easier way of not only administering to the sick, but also of performing operations. They decided that Jefferson county must have a hospital, even if it had to be only on a limited basis.

Dr. Venning was the first one to take visible and definite steps towards providing such an institution when in December of 1904 he converted the second floor of his home to use as a hospital. He built five bedrooms, one bath, an operating room and a sterilizing room and this was the nucleus of Charles Town and Jefferson county's first hospital.

Dr. Venning and his wife continued to operate the hospital as a place for the doctors of the county to bring their patients and perform their operations until the Fall of 1909, when they rented it to the late Miss Anna Hughes of Charles Town. Then in 1911 after he had built and established a residence on some land adjoining the hospital property, Dr. Venning made it possible for the entire structure to be used as a hospital and once again he took over management of the facility. A short time later he sold the facility to a group of stockholders for $10,000. Residents of the county were canvassed for gifts and urged to purchase stock in the hospital; and as a result of the fine response it was no time at all before the building was remodeled and enlarged and given the name of the Charles Town General Hospital. It was created as an "eleemosynary" or non-profit institution and thus excluded from taxation. Today it remains as the same type of institution. 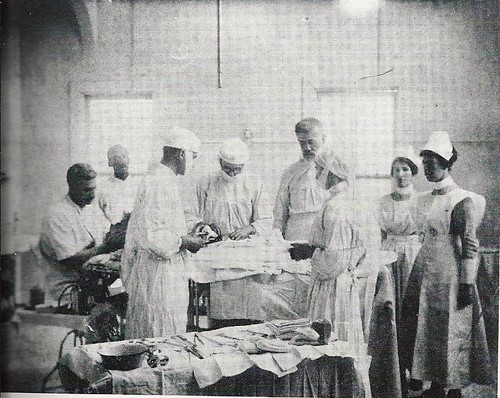 
The first meeting of the board of directors of the hospital was held Feb. 5, 1912 at 4 p.m. and William W. Rouss was named as the first president of the hospital board. Named as the first vice-president was Dr. C. L. Skinner, with Dr. Albin being named secretary and W. O. Norris as treasurer. A board of management composed of Dr. R. E. Venning, Dr. William Neill and S. L. Phillips was also named.

Miss Hallie Washington, a Johns Hopkins graduate, served as the first instructor and supervisor of nurses for the hospital, with Miss Edith McGarry of Shenandoah Junction being the first student nurse.

The completed story of how these courageous people fared with their momentous venture is provided in the new and modern Charles Town General Hospital which was dedicated October 3, 1948. That was the day the old hospital which had served the county so long and so faithfully for 45 years, passed out of the picture of Jefferson county's everyday life, but not out of the county's history. That was the day when the doors of a new and modern haven of healing and rest were swung wide for all to enter regardless of race, creed or color. And that was the day a new chapter was written in Jefferson county's story of history and progress.

Yes, in the past 50 years much has taken place in the history and progress of medicine and its practice in Jefferson county.

The history of the Charles Town General Hospital will always stand as a venture of faith. And it was a triumphant venture because men and women had vision and they had faith. It stands as a challenge to those of today to measure up to the faith of those of yesteryears and to bravely carry on.

The 1948 incarnation of the hospital was replaced in 1975 by the present one, directly behind its location. Since then it has undergone several additions and renovations, the latest a new emergency entrance and care suite.

Some More of the Story

If you haven't recognized the building that housed the first hospital, then you might if you saw it in living color in a photo taken from the parking lot behind Jumpin' Java and Valley Hardware, the Sadler Block. It's the administration building of the American Public University System on Congress St. In 2004 APUS memorialized the story of its building as a book, The Big Yellow House. A story in Focus, a publication of the West Virginia Hospital Association explains:

The Big Yellow House, written by Carl J. Post, Ph.D., is available at locations throughout Jefferson County, including the new Visitor’s Center located on George Street across from the Court House. All proceeds of the book, which sells for $30.00, will benefit The Jefferson Health Care Foundation, The Jefferson County Historical Society, and the American Public University Foundation.

The original location for Charles Town General Hospital, the Big Yellow House was established in 1904 when South Carolina native Dr. Richard Edmondston Venning agreed to convert the second floor of his home located on West Congress Street in Charles Town.

In 1948, the house became a successful nursing home until 1996, when it became home to the online American Public University System. Today (9/2010) Jefferson Memorial thrives on South Preston Street in Ranson....

We're not sure if The Big Yellow House is still in print, but I can say it has some great photos and an even more interesting story and it can be read in the Perry Room of the Old Charles Town Library. We'd be interested in more stories of the hospital from 1948 (it had a relatively short role as a nursing home) and of Knott's Nursing Home, the successor to the yellow house.